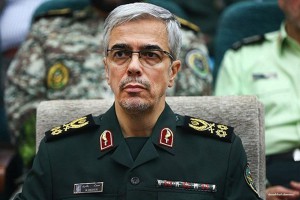 A leader of Yemen’s Houthis and a member of the group’s delegation to the talks in Kuwait, Mehdi Mashat, has slammed the Iranian Chief of Staff, Major General Mohammad Bagheri over remarks published Sunday about Iran’s desire to establish naval bases in Yemen and Syria.

“This creature should read the history of Yemen before he talks, because I am sure that if he knew that Yemen throughout history has been a cemetery for invaders, he would not have said a word”, Mashat said in a post on his official Facebook page.

Mashat has also shared a picture from an Iranian news site about Iran’s determination to establish military bases in Yemen.

“We need distant bases, and it may become possible one day to have bases on the shores of Yemen or Syria, or bases on islands or floating (bases),” said General Mohammad Hossein Bagheri as quoted by the Shargh daily newspaper.