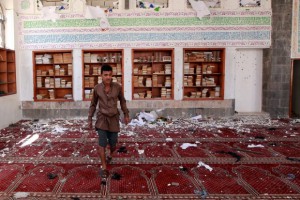 After Houthi fighters took control of the Yemeni capital of Sanaa on 21 September 2014, and soon other provinces, several armed groups including al-Qaeda in the Arabian Peninsula (AQAP) and the Islamic State (IS) declared they were against the Houthis.

In this way the Shia Houthi fighters became a target for AQAP and IS, both Sunni groups. Last week, when AQAP announced the death of their leader Nasser al-Wuhayshi, they declared that they were fighting the Houthis in 11 places, mentioning that they supported “popular resistance” in various governorates.

In the meantime, IS also claimed responsibility for targeting mosques in Sanaa on last Thursday and Saturday, when cars laden with explosives killed more than 30 people. IS said it targeted Houthi rebels at the mosques. Although the mosques are under Houthi control, Sunnis also pray at them.

The announcement by AQAP and the IS attacks are a clear indication that there is a competition between IS and AQAP in Yemen. The two groups are rallying for more supporters by targeting Houthis.

AQAP out of the war

Saeed Obaid al-Jomhi, an expert on al-Qaeda and various Islamist movements, told Middle East Eye that AQAP’s declaration of war against the Houthis was all talk.

“AQAP are trying to say that they are supporting the legitimacy and they are serving the nation by fighting Houthis, but in fact they do not fight Houthis; rather they are trying to get new supporters by such statement,” al-Jomhi told MEE.

Al-Jomhi said that AQAP was harmful to Yemen because it gives Houthis a reason to fight in several provinces under the excuse that they are fighting al-Qaeda.

He said Houthis would occupy new provinces in order to “evacuate them” of al-Qaeda and IS members.

“In fact AQAP does not fight Houthis as a group. If there are some members of AQAP fighting in different provinces, they are fighting to protect their own provinces from Houthis – they do not fight as members of AQAP. Thus we can say that AQAP is trying to give a fake statement to get new supporters,” al-Jomhi said.

“There are also militia that AQAP uses to fight Ansar Allah [Houthis], and Houthis fight these militia to keep the country safe,” al-Boukhaiti said.

The phenomenon of IS targeting mosques

Last week, IS targeted four mosques under the control of the Houthis – an act that is against the policy of AQAP, which says it does not attack people in mosques.

The first appearance of IS in Yemen was last March, when it claimed responsibility for targeting the Badr and al-Hashoosh mosques in Sanaa, killing more than 100 people and injuring hundreds more.

“There are some members of AQAP who support the policy of IS, and they are working individually or in small groups, but we cannot say that IS has an organised group in Yemen, as they do not have popular acclaim in Yemen,” al-Jomhi told MEE.

Last month a drone near the publican palace in AQAP-controlled al-Mukalla, the centre of Hadramout province, reportedly killed Mamoon Hatem, a leading figure in AQAP who is supporter of IS.

“AQAP do not fight IS, but it is against the strategy of IS that aim to kill its opponents anywhere – even in mosques. AQAP still has some red lines in its policy that prevent it from doing this,” al-Jomhi said.

Retired Brigadier Ahmed Obaid told MEE that the Yemeni government had led more than one military campaign against AQAP in the south; the last one was in April 2014 in the Shabwa and Abyan provinces.

He said the best solution for the Yemeni government to overcome the spread of IS in Yemen was to intensify security in Sanaa and the other provinces.

Civilians are the main victims

While both AQAP and IS are targeting Houthis, many of those killed by IS were not Houthis, especially those who were praying in mosques at the time of IS attacks.

Yahya Soroor, 57, is one of the people who was injured last Saturday in the Kobat al-Mahdi mosque, which was targeted by a car bomb explosion. Soroor is not a Houthi supporter, but rather says he goes to pray at any nearby mosque.

“What is the guilt of the civilians who were killed and injured by the attacks of IS in Sanaa?” he asked.

“All of them are Muslims, all of them civilians, always civilians are the main victim of the conflicts,” Saroor said.

“In an indirect way IS created new Houthi supporters, when people hear that IS target Houthis in their mosques, immediately they feel sympathy for the Houthis.”