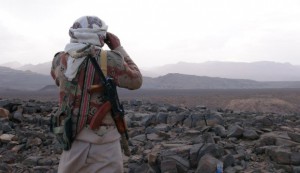 Yemeni troops who helped the Houthis to seize much of the country said Sunday that they had accepted a Saudi proposal for a ceasefire after more than six weeks of air strikes.

The announcement came as Saudi-led warplanes hit the Sanaa residence of ousted president Ali Abdullah Saleh, who is accused of orchestrating the alliance between the units and the Houthis.

There was no immediate word from the Houthis themselves on whether they too had accepted Saudi Arabia’s offer of a five-day pause from Tuesday in the devastating air war it has led in support of exiled President Abd Rabbuh Mansour Hadi.

The truce moves came as the UN expressed mounting concern about the civilian death toll from the bombing campaign and the humanitarian impact of the air and sea blockade that Saudi Arabia and its allies have imposed on its impoverished neighbour.

Coalition warplanes pounded the rebels’ stronghold of Saada in the northern mountains for a second straight night on Saturday after declaring the whole province a military target despite aid agency pleas to spare trapped civilians.

“Following mediation from friendly countries to establish a humanitarian truce… we announce our agreement,” said Colonel Sharaf Luqman, spokesman for the army defectors.

The units, who remained loyal to Saleh after he was forced from power in early 2012, played a major part in the Houthis capture of swathes of the country beyond their stronghold in the country’s northern highlands.

Their bases have been a major target of the coalition air campaign that the UN says has killed more than 1,400 people, many of them civilians.

Saudi Foreign Minister Adel al-Jubeir made the ceasefire proposal on Friday with strong backing from Washington which has provided logistical support for its leading Arab ally but not carried out air strikes.

Jubeir stressed that the truce offer needed to be matched by the Houthis and that it would be broken off if they made any move to exploit it for military advantage.

“The ceasefire will end should Huthis or their allies not live up to the agreement – this is a chance for the Houthis to show that they care about their people and they care about the Yemen people,” Jubeir said at a joint news conference in Paris with US Secretary of State John Kerry.

Kerry said the ceasefire would take place “provided that the Houthis agree that there will be no bombing, no shooting, no movement of their troops or manoeuvring to reposition for military advantage (and) no movement of heavy weapons”.

He said the pause in hostilities was a “renewable commitment” that, if it held, “opens the door to possibility of an extension”.

Saleh’s political party, the General People’s Congress, welcomed the proposal, expressing hope it would minimise the “impact of the aggression that has burdened the Yemeni people with unprecedented suffering and an unparallelled blockade.”

Saudi-led warplanes carried out two air strikes on Saleh’s Sanaa residence early on Sunday, witnesses said. He was not believed to have been at home when they hit.

The UN Security Council has imposed sanctions on both Saleh and his son for their support for the Houthis and their undermining of the transition since his ouster following a bloody year-long uprising.

Coalition aircraft also carried out intensive air strikes on Saada province for a second straight night after giving civilians until Friday evening to flee the province.

Riyadh said the Houthis had crossed a “red line” with deadly shelling of populated border areas of the kingdom last week.

Residents reported at least 15 raids across the province. Houthi chief Abdul Malik al-Houthi’s home town of Marran was again among the targets.

Aid agencies warned that large numbers of civilians remain trapped in the province unable to find transport to leave.

The UN has said that the fighting and the coalition blockade have led to a rapidly worsening shortage of fuel that is also preventing the distribution of desperately needed aid.

Doctors without Borders (MSF) said it had been “impossible” for Saada’s entire population to leave in just hours, and called on the coalition to avoid hitting residential areas.