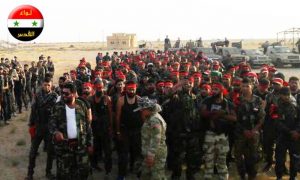 At least 17 militiants from the Palestinian Liwa al-Quds militia have been killed in a suprpise attack by Daesh (ISIS) in the Syrian desert, Jihadist news feeds reported according to zamanalwsl.net.

The attack took place east of the central Homs city when Daesh militants hit a military convoy for the regime forces and the allied al-Quds militia.

Liwa al-Quds that was formed in 2013 is one of Russia’s favorite militia groups inside Syria where its fighters get direct aid and military training by Moscow.