You are here: Home / Europe / Homegrown ISIS jihadis plotting European 9/11 and terror chiefs say ‘2015 was NOTHING’ 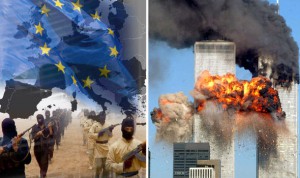 A report from Germany’s interior ministry says the country can expect a Paris-style attack by “completely brutalised” returnees from war-torn Syria.

In a confidential internal report leaked to the German media officials said the country is a “declared target” for fanatics who want to mimic the gun and bomb attacks that killed 130 people in the French capital on November 13.

The report said: “Germany is declared an actual target of jihadist motivated violence which can come at any time in the form of acts of violence against state and civil institutions as well as civil servants and civilians”.

Around 850 Germans have left their homeland in the last 18 months to two years to fight for radical groups including Islamic State (ISIS) in Syria and Iraq.

More than 300 are said to have returned – who were described by intelligence experts as “hardened and completely brutalised”.

The revelation comes after French anti-terror experts warned the two major attacks in Paris last year were a “dress rehearsal” for coordinated attacks across Europe in 2016.

French intelligence sources said Europe is expecting far more professional and better organised attacks in 2016 after attacks on Charlie Hebdo and series of attacks in November.

A senior counter-terrorism official said: “Unfortunately, I think 2015 was nothing.

“We are moving towards a European 9/11: simultaneous attacks on the same day in several countries, several places.

“A very coordinated thing. We know the terrorists are working on this.”

Yves Trotignon, a former member of the French intelligence service DGSE, said the attacks in January and November 2015 were worryingly “amateur” despite all the bloodshed they caused and that jihadis will be working towards more bloody attacks.

Mr Trotignon said: “The November 13 attacks, from the terrorists’ point of view, involved a large number of tactical mistakes that they will learn from.

“For example, the death toll at the Bataclan [where 89 people were killed] was limited because the attackers ran out of ammunition.”

“At the Stade de France the bombers were unable to get into the stadium.

“And the suicide vests turned out to be less than lethal for bystanders, while at least one failed to detonate and was abandoned.”

Mr Trotignon said terror cells “learn from their mistakes, are very discreet, don’t use phones or the Internet to communicate, and don’t keep incriminating evidence in their homes”.

He added: “There have been barely a dozen arrests in France as a result and France cannot continue in a perpetual state of emergency.

“Very serious questions have to be asked about why the security services were unable to prevent the November 13 attacks.

Tensions are continuing to rise in Germany in the wake of the Cologne sex attacks on New Year’s Eve as European officials express fears of similar incidents spreading across the continent.

More than 500 women were sexually assaulted and robbed across Germany, while reports of similar incidents have been reported in Finland, Sweden, Austria and Switzerland.

A former judge with Germany’s constitutional court has blasted Chancellor Angela Merkel for her refugee policy, accusing her of breaking the law after letting in more than a million migrants sat year.

Michael Bertrams said: “Going it alone was an act of self-empowerment.

“Merkel’s policy of opening Germany’s doors to refugees was full of empathy but lacking in a plan.”