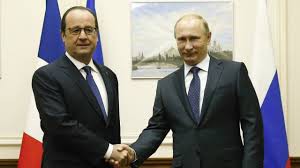 French President Francois Hollande will visit Moscow on Thursday to hold talks with Russian president Vladimir Putin as a part of his endeavour to establish a broader international coalition against the Islamic State armed group.

Before heading to Russia, Hollande met Italian Prime Minister Matteo Renzi in Paris in the morning.

This week, the French President has gone into a diplomatic overdrive, meeting top world leaders in order to build a coalition to crush the IS armed group in Iraq and Syria.

Hollande hosted British Prime Minister David Cameron in Paris after which he flew to Washington to meet US President Barack Obama.

German Chancellor Angela Merkel visited Paris on Wednesday and pledged to stand beside France in its fight against the jihadist group.

France invoked a clause requiring European Union member states to provide military assistance after the November 13 attacks in Paris, when 130 people were killed by suicide bombers and gunmen belonging to the Islamic State armed group.