You are here: Home / Europe / Hollande In Morocco to discuss terrorism 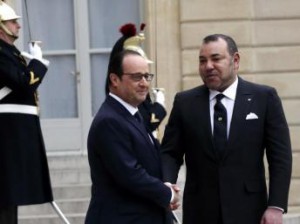 French President Francois Hollande is leading a large delegation in a two-day visit to Morocco, amid controversy surrounding the head of the Moroccan secret services who was accused in Paris of torture.

Hollande will arrive Saturday in Tangier to meet with King Mohammed VI and Moroccan Prime Minister Abdelilah Benkirane. He will be accompanied by five ministers and a delegation of business leaders, as well as Paris-based Moroccan writer Tahar Ben Jelloun and French-Moroccan actor Jamel Debbouze.

While this trip has been described by Paris as a visit of “work and friendship”, human rights groups have expressed concern that it could be an opportunity to award Abdellatif Hammouchi, director general of Rabat’s DGST, the legion d’honneur – France’s highest award.

In February, Interior Minister Bernard Cazeneuve announced that Paris would soon decorate Hammouchi for his role in the fight against terrorism, despite allegations that his agency was involved in torture.

Moroccan activists in France had filed a lawsuit accusing the intelligence service of torturing them while in detention in Morocco, and French police had tried to question Hammouchi during a visit to Paris.

Morocco broke off legal cooperation with France because of the legal complaints filed there, but the two countries renewed those ties in January after an 11-month break.

The French president’s entourage has categorically denied any plans to honour Hammouchi during this weekend’s visit.

Hollande has said he intends to strengthen economic ties between the two countries.

French group Alstom delivered its first TGV high-speed train to the north African country in June as part of a 400-million-euro order for 14 trains for the Tangiers-Casablanca route.

Hollande and King Mohammed VI are expected to hold talks on preventing radicalism and are to sign an agreement on the training of imams, a diplomat has told French news agency AFP.