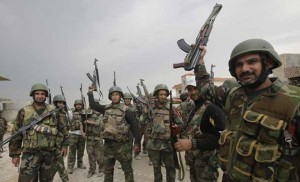 Hizbullah fighters backed by the Syrian Army reportedly took control of new militant positions on the outskirts of the Syrian al-Qalamoun town, which borders Lebanon.

Al-Manar reported that Hizbullah and the Syrian forces completely seized the outskirts of al-Juba town, which compelled Islamists militants to flee the area towards Ras al-Maarah, Fleita and al-Rahwa, along the Lebanese border.

Voice of Lebanon (93.3) also said that Hizbullah and the Syrian troops took control of al-Mohmadat Hill, which oversees Wadi al-Zaaroura that links the outskirts of Brital with Juba.

Syrian jets also shelled the outskirts of the northeastern border town of Arsal and flew over Lebanon’s Eastern Mountain range.

Fighting has intensified in the past week in the mountainous al-Qalamoun region across the border from Lebanon, where militants from the Islamic State group and the al-Qaida-affiliated Nusra Front are entrenched.

Hizbullah and Syrian government troops took control on Thursday of strategic heights in the Syrian region of al-Qalamoun that abuts Lebanon’s eastern border.

The control of the area on the outskirts of Assal al-Wared came following heavy clashes with al-Nusra Front.

Hizbullah stated on Friday that the number of fighters who were killed in Syria’s al-Qalamoun front were only three, denying media reports claiming otherwise.

Some media outlets said that more than 40 of Hizbullah fighters had died in fighting against Islamic militants near the border with Lebanon this week.

However, al-Nusra Front said in statement via Twitter: “A large number of Hizbullah and Syrian army members were killed and others wounded in fighting with al-Fatah al-Qalamoun army in Assal al-Wared.”

Hizbullah has been fighting alongside Assad’s forces against predominantly Sunni rebels and militants seeking to topple him.

On Friday, Hizbullah and the troops of Syrian President Bashar Assad attacked militant posts in al-Qalamoun’s Juba area after they compelled them to withdraw from the town of Assal al-Wared, which is near the Lebanese border enclave of Tufail, which is surrounded by Syrian lands to its north, east and south, and by the Lebanese villages of Ham, Maarboun and Brital to its west.