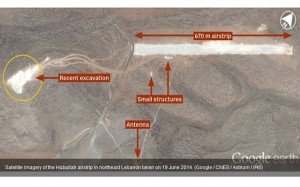 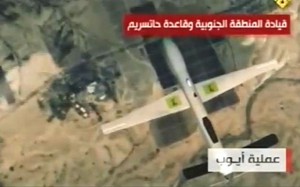 The airstrip in the northern Bekaa Valley was built sometime between February 2013 and June 2014, according to analysis by the magazine IHS Jane’s Defence Weekly.

The strip around 10 miles west of the Syrian border was spotted on satellite images that recently became available on Google Earth.

The single unpaved strip, which is around 730 yards long, is unlikely to be a smuggling route for weapons shipments because it is too short to take transport planes, said the magazine’s Nicholas Blanford.

It may instead be built for Iranian-made unmanned aircraft, including the Ababil-3, which has been employed over Syria by Bashar al-Assad’s allies, and possibly the newer and larger Shahed-129, he said.

Hizbollah has reportedly confirmed it is using drones to back regime operations against rebel forces in Syria, particularly over the mountainous Qalamoun region on Lebanon’s eastern border.

The strip also features an antenna and six buildings.

Iran’s Ababil, or Swallow, surveillance drone has a flying range of around 60 miles and a top speed of 125mph, the country’s state media said last year.

It can fly to a height of 5,000m “and enjoys a high photography and imaging technology” it was reported.