You are here: Home / Mediterranean / Hizballah and Lebanon’s new President 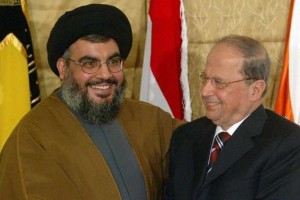 As Lebanon celebrates the election of a new president after more than two years of parliamentary deadlock, Lebanese Hizballah hails the election as a vindication of its ever-expanding role in Syria. On October 31, Michel Aoun was elected to the Presidency of Lebanon, which has been vacant since 2014. As the founder of the Free Patriotic Movement (FPM)—a Christian party allied with Shi’a Hizballah since 2006—Aoun’s election points to a growing consensus within the divided country that Lebanese national security is inextricably tied to Hizballah. While Hizballah claims that it is indispensable in its role in the conflict with Israel, the Syrian civil war has fortified the group’s position as the self-proclaimed guarantor of Lebanese national security.

For years, Hizballah has argued that its military wing is essential to preserving security in Lebanon. The Shi’a military-political movement of today is a far-cry from its original incarnation as an Iranian supported resistance group in the 1980s. As the threats facing Lebanon have evolved, Hizballah has filled the vacuum left by a weak government and military. From the ongoing conflict with Israel, to its involvement in the war in Syria, to its role as an Iranian proxy, Hizballah continues to advance as a regional force.

Aoun’s FPM and Hizballah have maintained a relationship since February 2006, when they released a joint ‘Memorandum of Understanding’. Prior to the agreement, the two groups were in opposition; bringing a major Christian faction into any sort of alignment was an important victory for Hizballah, which sought to bolster its image as the protector of Lebanon more broadly. Hizballah’s claim to defend Lebanon from Israel was reinforced by its impressive military performance in 2006. While culpability for initiating the war was contested, for many Lebanese, Hizballah was perceived as the only defense against a far-superior Israeli force. The support of the FPM throughout the conflict lent Hizballah significant credibility.

The Syrian civil war has threatened to engulf Lebanon since 2011, with spill-over from across the border aggravating the country’s historical sectarian disputes. Sunni extremist groups—such as the so-called Islamic State and Jabhat al-Nusra (now Jabhat Fateh al-Sham)—have targeted Shi’a neighborhoods in Lebanon in efforts to incite an internal conflict. On the border, al-Nusra threatened Shi’a towns in the Bekaa valley. At the same time, Hizballah fighters deployed to Syria have been instrumental in turning the military situation in favor of the Assad regime since 2012. To its critics, Hizballah’s military engagement in Syria has made matters worse; to its supporters, Hizballah has taken the fight to the extremists, preventing terror attacks within Lebanon.

For Hizballah, the election of Aoun symbolizes a national consensus over its role in Syria. Days before the election, Aoun met with Secretary General of Hizballah, Hassan Nasrallah, who urged national unity in electing Aoun. In his inaugural speech, Aoun mimicked Hizballah’s stance on Syria, asserting that he would deal with terrorism ‘preemptively’—a point that Nasrallah has made profusely. The FPM even lauded Nasrallah as its ‘partner in victory’ in the presidential election, demonstrating how far the FPM-Hizballah relationship has come in the ten years since their reconciliation.

With the election of Aoun, Lebanon is likely to move closer to the influence of the Syrian regime, as well as Iran. Aoun has already promised to coordinate with the Assad regime in returning Syrian refugees. While Aoun has stated his commitment to pursuing an ‘independent foreign policy’, it is unclear what that will mean in light of Syrian and Iranian influence in the country.

Just as Hizballah emphasized the FPM’s endorsement prior to the 2006 war, the group will likely continue to tout the election of Aoun as a national consensus on its activity in Syria. Hizballah will likely continue to operate extensively in Syria, as the group’s own survival and the fate of Lebanon are increasingly tied to the endurance of the Syrian regime. Thus, the election of Aoun is likely to push Lebanon ever deeper into regional entanglements, as the lines between national priorities and those of Hizballah are increasingly blurred.