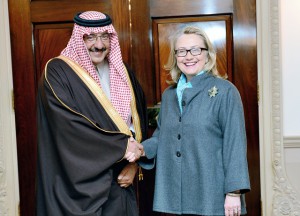 In a leaked email sent on August 17, 2014 by Hillary Clinton to her current campaign manager, John Podesta, who back then was counselor to Barack Obama, she admitted that Qatar and Saudi Arabia “are providing clandestine financial and logistic support to ISIL and other radical Sunni groups in the region.”

The email, which was sent just days after the US launched it “temporary” air campaign in Syria, which has now extended over two years, represents an eight-point plan laying out ideas how to defeat ISIS in Iraq and Syria. Clinton’s email said that the United States should engage in “military operations against these very irregular but determined forces” by “making proper use of clandestine/special operations resources, in coordination with airpower, and established local allies” such as Kurdish forces.

Having confirmed the role of Qatar and Saudi Arabia, Hillary then states that “we need to use our diplomatic and more traditional intelligence assets to bring pressure on the governments of Qatar and Saudi Arabia” and recommends to step up US commitment to the Kurdish Regional Government or KRG. “The Qataris and Saudis will be put in a position of balancing policy between their ongoing competition to dominate the Sunni world and the consequences of serious U.S. pressure.  By the same token, the threat of similar, realistic U.S. operations will serve to assist moderate forces in Libya, Lebanon, and even Jordan, where insurgents are increasingly fascinated by the ISIL success in Iraq.”

Just as notable was Hillary’s warning that ISIS will spread should the US not forecefully engage the terrorist organization to halt its spread: “if we do not take the changes needed to make our security policy in the region more realistic, there is a real danger of ISIL veterans moving on to other countries to facilitate operations by Islamist forces.  This is already happening in Libya and Egypt, where fighters are returning from Syria to work with local forces. ISIL is only the latest and most violent example of this process.  If we don’t act to defeat them in Iraq something even more violent and dangerous will develop.  Successful military operations against these very irregular but determined forces can only be accomplished by making proper use of clandestine/special operations resources, in coordination with airpower, and established local allies. There is, unfortunately, a narrow window of opportunity on this issue, as we need to act before an ISIL state becomes better organized and reaches into Lebanon and Jordan.”

Considering that the ISIS state has already reached deep inside Europe, one wonders why the US is more fixated on halting the Russian encroachment, and defense of the Assad government, in Syria than pursuing its stated course.

The revelation comes a day after Reuters reported that the US risks being branded a war criminal for its support of the Saudi war in Yemen, which has led to thousands of innocent civilian casualties, and which is only possible due to US military support and weapons. As a reminder, since March 2015, or when the Saudi conflict in Yemen started, Washington has authorized more than $22.2 billion in weapons sales to Riyadh.

As a reminder, Qatar has given between $1 million and $5 million to the Clinton Foundation and Saudi Arabia has donated upwards of $25 million dollars to the Foundation.