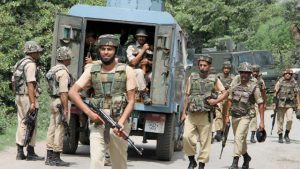 Ahead of the Republic Day celebrations, intelligence agencies have sounded high alert in New Delhi and Jammu and Kashmir, CNN-News18 reported on Tuesday. The alert has been sounded four days after a CRPF vehicle with a Jammu and Kashmir number plate was stolen from Delhi’s RK Puram area, like reported by firstpost.com.

The RK Puram Police has still not been able to trace the stolen Tata Sumo vehicle.

According to intelligence agency sources, militants can use the vehicle for carrying out explosions in New Delhi and Jammu and Kashmir.

CNN-News18 reported that intelligence agencies fear that militants may attack these areas at a time when Heads of State of 10 ASEAN countries are set to attend the celebrations this year.

Fearing an attack by Zakir Musa-led militants , senior police officials have been deployed across Delhi and Jammu and Kashmir as a result of the high alert, the report said.

As noted by this July 2017 Firstpost report, Musa, the former commander of Hizbul Mujahideen, was made the head of Al-Qaeda’s Kashmir-based operations.