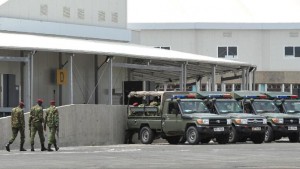 Security has been beefed up at major airports across the country following intelligence reports that Al-Shabaab militants are planning to stage attacks.

A leaked internal memo shows up to 11 Al-Shabaab suicide bombers have been trained ready for the mission.

According to the memo from the Kenya Airports Authority security, the planned attacks to be staged end of February and early March will target domestic flights.

The memo revealed that a team of 11 suicide bombers have undergone training in Somalia on airborne suicide missions in readiness for the attacks.

The police have beefed up the security across the airports following the report.

The report comes just weeks after armed group claimed the responsibility of a suicide attack on Somali airliner Dallo airlines on 2nd February after taking off from Mogadishu International Airport.

The group said it was targeting western intelligence and Turkish NATO forces on board.

Kenya has suffered spate of attacks from Alshabaab since its incursion inside Somalia.

Group recent attack of KDF El-Ade camp that resulted the death of unspecified number of Kenyan troops but claimed by Somali President as more than 200.