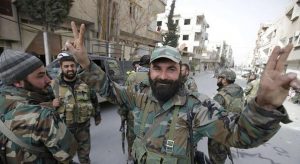 As President Bashar al-Assad’s regime consolidates its control over much of Syria — appearing ready to launch an offensive against Idlib, the last major insurgency stronghold — observers are wondering what the end to the war will mean for Hezbollah’s involvement there in the wake of Assad’s seemingly impending victory? The Iran-supported, Lebanon-based Shiite militant group became heavily involved in the civil war in 2015, backing and beefing up Assad’s previously beleaguered forces, like reported by al-monitor.com.

Russia’s support of Assad appears to be yielding significant results with the passing of days. The July 16 summit between US President Donald Trump and Russian President Vladimir Putin in Helsinki was followed by a deal between Moscow and Tel Aviv under which Iranian forces would retreat 53 miles from Israel. Planned talks involving Russia, France and Germany in Turkey appear to be working toward an understanding on the conflict. These geopolitical changes will have significant repercussions for the various players in Syria, including Hezbollah.

“Hezbollah will continue its combat role until the end of the civil war, with the group maintaining its usual [offensive] point-of-the-spear role,” Hezbollah expert Nicholas Blanford, author of “Warriors of God: Inside Hezbollah’s Thirty-Year Struggle Against Israel,” told Al-Monitor.

The Lebanon-based journalist Kassem Kassir told Al-Monitor, “Everyone wants a political solution in Syria, and there are negotiations aimed at avoiding a confrontation in Idlib. Depending on whether these negotiations work out — which also hinges on bringing to heel a number of different groups, including jihadist formations there — the number of Hezbollah fighters deployed in Syria could significantly drop, if there are no more offensives.”

Kassir estimates that several thousand Lebanese militants are fighting in Syria alongside Assad’s forces. The US State Department’s Country Reports on Terrorism 2016 put the number at about 7,000 Hezbollah fighters.

Hezbollah’s strategy in Syria has been built on leading ground offensives, capturing and consolidating terrain, as well as training. In interviews, the organization’s fighters deployed in Syria have said that Hezbollah has been responsible for leading troops loyal to Assad during offensives. According to Kassir, the organization has also contributed significantly to building and training pro-regime forces, particularly the Local Defense Forces. It participated in successful campaigns in Aleppo, Deir ez-Zor and southern Syria alongside Assad loyalists.

“Despite Russia’s statements on limiting the Iranian presence in Daraa and Quneitra, Hezbollah has been massively involved in battles there,” said a Lebanese source close to Hezbollah who spoke to Al-Monitor on the condition of anonymity.

Hezbollah’s task might be shifting, however, now that the war appears to be reaching a final inflection point at Idlib and many of the other frontlines are settling down with the regime consolidating its grip. Hezbollah’s media office declined Al-Monitor’s request for an interview.

Mohanad Hage Ali, author of “Nationalism, Transnationalism and Political Islam: Hizbullah’s Institutional Identity,” told Al-Monitor that he thinks the organization will revert to its pre-2011 role.

“I see Hezbollah returning to a limited presence in Syria, probably as more of a ‘bonus,’” Ali said. “On top of its presence in Zabadani and Sayyida Zeinab, maintaining some sort of presence in Qalamoun might be reasonable. The Assad regime’s authoritarian nature doesn’t allow Hezbollah to share its monopoly over violence, specifically with Israel. It doesn’t give away control, so Hezbollah will have to revert to its previous official relation with the regime. It’s also under pressure to do so from Russia.”

Other analysts and sources envision Hezbollah maintaining a long-term presence in Syria.

“There is no withdrawal for now, only redeployments of troops in the various areas,” said one source. “If the situation stabilizes definitely, Hezbollah would pull out from certain regions, but there are areas it considers strategic that it will never leave.”

Hezbollah’s current military positions include those at Qusayr, Qalamoun and Aleppo. In May, the Israeli air force attacked an alleged Hezbollah base inside Homs governorate. The Dabaa military airport and surrounding area in western Homs province appear to have been sites for Hezbollah weapons warehouses.

According to Blanford, Hezbollah is unlikely to give up its bases in Qusayr and Qalamoun.

“There is also another aspect to Hezbollah’s role in Syria, which is based on a continued confrontation with Israel,” Blanford explained. “Iran will play the long game in southwest Syria by relying either on Hezbollah or Iraqi militant groups. Tehran will also want to extend what Hezbollah has on its Lebanese frontier with Israel, to the Golan, and leverage southwest Syria in its confrontation with Israel in the long run. Iran is trying to shape its strategic interests in Syria as time passes by, to maintain its land bridge there against Israel.”

Another dimension to Hezbollah’s role in Syria might involve training the new Syrian army.

Iran and Hezbollah have experience developing resistance groups, such as the Local Defense Forces in Syria. Kassir noted, “They could work on replicating [Iran’s Islamic Revolutionary Guard Corps] model in Syria, as has been done in Iraq with the Popular Mobilization Units.”

Hezbollah’s future in Syria will be defined not only by Iran’s interests, but also, and more importantly, by Russian calculations, Blanford said.

“Russia and Iran have been important battlefield allies in the shared goal of safeguarding the Assad regime,” Blanford remarked. “But as things move forward, their respective interests in Syria may begin to diverge. We are already seeing some signs of this. But it is unclear what leverage Russia can bring to bear to restrain Iran’s longer-term agenda in Syria, and also unclear if Moscow has a will to act against Tehran there. Israel and the US seem hopeful that Russia will serve as a block to Iranian ambitions in Syria, but this could be wishful thinking.”