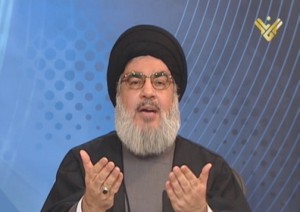 Hezbollah leader Sayyed Hassan Nasrallah has condemned Saudi Arabia over its military intervention in Yemen, saying the unfolding developments there deter focus from Israel as the enemy in the region.

In a televised speech, Nasrallah denounced air strikes on Yemen as “unjust, Saudi-American aggression” and blamed Riyadh for “abandoning” the Palestinians.

“If the aim of the war on Yemen is to save the Yemeni people, then why did Saudi Arabia abandon the Palestinian people for long decades?” the Hezbollah leader said in a speech aired on the group’s al-Manar TV station.

He added that the events in Yemen prove “that Arab states have never considered Israel an enemy.”

The Lebanese Shi’ite group, which is backed by Iran, joined Tehran in calling on Saudi Arabia and its allies to immediately and unconditionally halt the strikes.

“Throughout history, the invaders are defeated and humiliated. The rulers of Saudi Arabia still have a chance not to be defeated or humiliated, they still have the chance to reconsider their erroneous politics and to treat Yemenis as brothers and move towards dialogue. All these doors are open,” Nasrallah said.

“First, we condemn the unjust, Saudi-American aggression on Yemen, its people, its army, its infrastructure and its present and future. Secondly, we call for an immediate halt of this aggression, stopping every second of it. Third, we call for a restoration of talks to find a political solution in Yemen, and this is possible,” he added.

His speech echoed comments by Iran, which is allied with the Yemeni Houthi rebels fighting to oust the country’s US-backed president. The Houthis made broad gains in the country’s south and east on Friday despite a second day of air strikes.

Nasrallah said Saudi Arabia was striking Yemen because it had lost control over the country and Yemenis were rising up against it.

He criticized Sunni Arab Gulf states for taking part in the ‘unjust aggression’, saying that they had always treated Yemen as a second-class country and blocked it from entering the six-member Gulf Cooperation Council.

In a boost for Saudi Arabia, Morocco said it would join the rapidly assembled Sunni Muslim coalition against the Houthis.