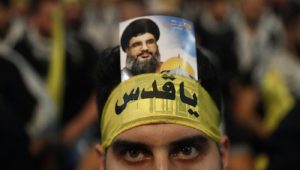 Hezbollah, the Iranian-backed, Lebanese-based terror group, is preparing for another war against Israel. And one of its chief weapons will be the press, like reported by washingtonexaminer.com.

Hezbollah (Arabic for “Party of God”) is a Shi’ite Muslim, U.S.-designated terrorist group that receives its marching orders from Tehran. Ordered to disband by UN Resolutions 1559 and 1701, the organization has instead repeatedly attacked the Jewish state.

In 2006, the Shi’ite militias’ decision to kidnap Israeli soldiers led to a brutal thirty-four-day war. Throughout, the group proved adept at manipulating the media.

Hezbollah’s tactics have included indiscriminate missile launches and artillery fire from civilian areas. This allows the nearby civilians to be used as “human shields” for propaganda purposes. Many in the media failed to note this double war-crime or uncritically quoted claims of anti-Israel NGOs that—echoing Hezbollah propaganda—charged Israel with carelessly targeting civilians.

On certain occasions, the Western press did, in fact, note Hezbollah’s propaganda methods. For example, the Australian newspaper The Herald Sun published images showing members of the terror group dressed in civilian garb and operating anti-aircraft weaponry in a residential Lebanese neighborhood. In another instance, CNN producer Charlie Moore noted a “well-coordinated and not-so-subtle” effort by Hezbollah to manage the press via “guided tours” complete with photo opportunities of prearranged ambulances, driving around in circles with sirens blaring.

Hezbollah is nothing if not image-conscious. As one operative, Sheik Nabil Qaouk, told The New York Times in July 2000, “The use of the media as a weapon” has “an effect parallel to a battle.” In this respect, Hezbollah is well armed.

The group operates its own TV channel, Al Manar (The Beacon), which routinely broadcasts calls for “Death to America,” age-old antisemitic tropes and hate speech, and promises of the impending destruction of the Jewish state. In 2006, Al Manar was labeled a Specially Designated Global Terrorist Entity, along with other Hezbollah-linked mouthpieces such as the Lebanese Media Group and Radio al-Nour. In its statement announcing this designation, the U.S. Treasury Department noted that an Al Manaremployee had used his position to engage in “preoperational surveillance” on behalf of Hezbollah.

When it’s not running its own press operations, Hezbollah seeks to influence others’. In his 2009 book, The Media Relations Department of Hizbollah Wishes You a Happy Birthday, New York Times reporter Neil MacFarquhar wrote that the group even has a specific section tasked with cultivating the press by sending reporters birthday cards and well wishes, among other ham-handed methods. Similarly, journalist Michael Totten detailed in his 2011 work The Road to Fatima Gate how Hezbollah’s media relations office initially welcomed him, arranging interviews with English-speaking representatives of the organization, affecting a friendly tone and disseminating well-rehearsed talking points.

When charms fail, Hezbollah resorts to what it knows best: Intimidation and violence. CNN producer Moore noted that he and his film crew were “being watched” by members of the terror group as they traveled throughout Lebanon during the 2006 war. More recently, in 2012, journalist Rami Aysha was kidnapped, beaten and interrogated by Hezbollah while investigating the group’s arms trafficking to Syrian rebels for TIME magazine’s Lebanese bureau.

Indeed, as Totten pointed out in his book, the group’s history of targeting journalists during the 1980s, such as Terry Anderson of the Associated Press, who was held for more than six years, was well known among the foreign press.

There is every indication that Hezbollah is preparing for another war. According to April 19, 2016, testimony before the U.S. House of Representatives Foreign Affairs Committee, the Shi’ite terror group reportedly has more than 120,000 rockets and missiles—many of which are capable of advanced targeting. Battle-hardened from fighting in the Syrian civil war on behalf of their Iranian masters, the group has also developed an advanced unmanned aerial vehicle (UAV) capacity. These drones, as Middle East scholar Michael Rubin told the committee, could easily be deployed over international air paths above Tel Aviv’s Ben Gurion International Airport—potentially wreaking havoc on Israel’s economy.

The battle lines of the next conflict would be ripe for propaganda purposes as well.

In October 2016, Lebanon elected a Hezbollah-ally named Michael Aoun as president. Aoun is now commander-in-chief of the Lebanese Armed Forces (LAF), which receive U.S. taxpayer assistance. This is noteworthy, as prior to the September 11, 2001, terror attacks, Hezbollah was responsible for more American deaths than any other terror group. Aoun has declared that Hezbollah’s growing arsenal is “not in contradiction with the state.”

Hezbollah, meanwhile, has been candid about its aims and consistent in its methods.

The next Israel-Hezbollah war may feature the terror group’s widespread use of drones, indiscriminate firing of missiles, and launching attacks behind the cover of “human shields.” The group might even act in concert with the LAF. Whether or not the press will act as the “weapon” that Hezbollah intends it to be remains to be seen.