You are here: Home / Analysis / Hezbollah’s escalating conflict with Israel 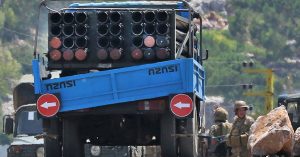 “At 11:15 a.m. this Friday, and in response to the Israeli air raids on open lands in the al-Jarmaq and al-Shawakir areas last Thursday night, the groups of the martyr Ali Kamel Mohsen [killed by the IDF in 2020] and the martyr Muhammad Qasim Tahan [killed by the IDF in 2021] in the Islamic Resistance bombed open lands in the vicinity of the occupation sites,” a Hezbollah statement said.

The Hezbollah cell that fired the rockets was stopped and detained by local Druze villagers as they fled the area after the attack. Subsequently they were arrested by the Lebanese Armed Forces, but later released, according to Lebanese reports.

Two incidents of rocket fire from Lebanon during the May conflict in Gaza were blamed on Palestinian militant groups operating in the country. However, after repeated attacks, a pattern has emerged suggesting a broader involvement of Hezbollah and possibly Iran.

What first must be understood is that little happens in southern Lebanon without Hezbollah’s knowledge – let alone if it’s an attack against Israel. Fifteen years of general calm on Israel’s northern border did not occur by happenstance. Both Israel and Hezbollah have shared an understanding of keeping the border quiet through mutual deterrence.

Israel mostly refrained from responding militarily to the May attacks, likely due to concerns of igniting a second front with Hezbollah in the midst of an operation in Gaza.

However, three rocket attacks from southern Lebanon since the end of hostilities in Gaza has made the explanation of Palestinian groups firing rockets moot.

Hezbollah likely understood that it would enter into a direct conflict with Israel if rockets continued to be fired into northern Israel. It would not have allowed the attacks to happen from its territory unless it was prepared for this eventuality.

Furthermore, even if Hezbollah used Palestinian groups to fire rockets into Israel, the act of using them as a proxy is inconsequential. By allowing the rocket fire, and likely supporting the cells who fired them, Hezbollah is ultimately responsible for the attacks.

The Israeli government’s policy is to hold Hamas directly responsible for all attacks coming from Gaza even when it is another group initiating the attacks. However, the impression created by the multitude of statements by the IDF and Israeli officials is that this policy isn’t reciprocated with Hezbollah in Lebanon.

By continuing to blame Palestinian groups for the rocket fire, the Israeli government is obscuring the reality of the situation it finds itself in which is a clear escalation of hostilities with Hezbollah initiated months ago. This leads to a confusing policy of holding one ruling non-state actor, Hamas, responsible for military actions in Gaza, but not the more stronger and dangerous Hezbollah in Lebanon.

There are many reasons why Hezbollah, and to an extent Iran, are heating up the northern sector of Israel.

Hezbollah finds itself in a very difficult situation as Lebanon’s economy seemingly descends into unending chaos. The Beirut port explosion, increasing anti-Hezbollah sentiment among Lebanon’s population, and sectarian clashes including the recent killing of several Hezbollah members by Sunni tribesmen, may have motivated Hezbollah into attacking Israel in an effort to divert attention from its domestic woes.

Another possibility is that Iran has changed its strategy vis-à-vis Israeli attacks against its nuclear program and assets in Syria. By using its chief proxy in Lebanon, Iran can entangle Israel in a cross-border conflict and distract it as it continues its malign activity in the region. Adding to that is the July 29 attack against an Israeli-operated oil vessel, MT Mercer Street, resulting in the deaths of two of its crew.

Israel warned it would respond to the Aug. 6 attack by Hezbollah. Although, it may not respond immediately, rather choose to wait in an attempt to calm the tension in the northern arena. However, the number of attacks over the last several months, and increasing Iranian belligerence, suggests an unfavorable outcome in keeping tensions from continuing to rise between the actors.