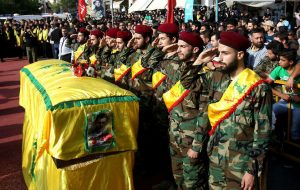 Iran has long relied on proxy groups to carry out its evil deeds in neighboring countries. And every year, the ruling regime pours billions of dollars of the Iranian people’s wealth into aiding and abetting these terrorist groups. However, as a firm policy starts to take shape against their belligerence in the region, Tehran and its surrogates are finding themselves in dire straits, like reported by washingtonexaminer.com.

The latest manifestation of this change of policy was a series of events triggered last week when Lebanese Prime Minister Saad Hariri declared his resignation from the premiership. Hariri’s statement came after a botched attempt at assassinating him in Beirut, allegedly planned by Hezbollah, a terrorist group with well-known ties to Iran. Hariri cited Iran’s influence and hostage-taking of his country through Hezbollah and threats to his life as the reason for his resignation.

Hezbollah was founded by members of Iran’s Islamic Revolutionary Guard Corps and has acted as an extension of the latter for more than three decades. Hezbollah has had an active role in carrying out Tehran’s terrorist ambitions in the Middle East and across the globe. It has fought on behalf of Iran in Syria to prop up Bashar Assad’s regime against opposition forces.

The government that took shape last year in Lebanon following a long, two-year impasse put too much power in the hands of groups aligned with Hezbollah, effectively handing over the reins to Iran. Tehran had been taking advantage of the situation to further inch its way toward accomplishing its goal of establishing a Shiite empire that spans across the Middle East.

Hariri’s resignation shook off what little legitimacy was left of the Hezbollah-dominated government, dealing a severe blow to the facade that enabled Iran to wield considerable clout over Lebanese politics and military.

What makes the move more significant is that it comes on the heels of a major push to crack down on the destabilizing activities of Hezbollah and its Iranian patrons. The U.S. House of Representatives recently passed two measures, including one that imposed sanctions on Iran and Hezbollah for using civilians as human shields, and a second that sanctions any entity that supports the group by supplying it with weapons, or by other means. The critical measures are meant to target Hezbollah’s financing, and “hold it accountable for its acts of death and destruction,” said Rep. Ed Royce, R-Calif., Chairman of the House Foreign Affairs Committee, who sponsored one of the resolutions.

A third resolution calls on the European Union to designate Hezbollah as a terrorist organization, a measure the U.S. took in 1997.

Shortly after Harriri’s statement, French President Emanuel Macron “reiterated the importance France attaches to Lebanon’s stability, security, sovereignty and integrity” during a visit to Riyadh, and concluded this “means having a very demanding stance on those who could threaten any leader,” a thinly veiled challenge directed at Hezbollah and Iran. This is in contrast with European politicians’ penchant for avoiding hard talk against Iran’s provocative actions in the region.

Trump’s new policy toward Iran, declared last month, aims to deal with the multitude of threats that Tehran and the IRGC pose to the nations of the region and across the world, a decision his predecessor was loath to make. The concerted clamp down on Hezbollah, the IRGC’s main foreign surrogate, is a vital step toward implementing this policy in earnest. It should be complemented by regional and global efforts to curb the destructive machinations of Iran’s other proxies, including the Popular Mobilization Forces, which account for crimes against humanity in Iraq and the Houthis in Yemen. Cutting off Tehran’s tentacles in the region in tandem with tightening the noose around the IRGC will ensure that Iran has no loopholes to exploit.