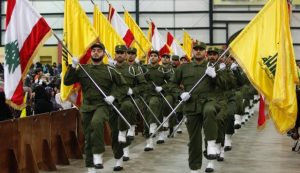 Hezbollah’s effective control over Lebanon will undermine President Donald Trump’s efforts to counter all terror threats in the Middle East, an expert on Lebanon argued in an analysis published Wednesday in Tablet Magazine and like reported by thetower.org.

Tony Badran, a research fellow at the Foundation for Defense of Democracies, wrote that Trump’s praise for and encouragement of the Lebanese Armed Forces (LAF) as a counter-force to Hezbollah is misplaced because Hezbollah controls Lebanon.

During his joint press conference with Lebanon’s Prime Minister Saad Hariri on Tuesday, Trump praised Lebanon for its resilience “on the front lines in the fight against ISIS, Al Qaeda, and Hizballah.” The president also added that “Hizballah is a menace to the Lebanese state.”

Trying to combine an anti-Hezbollah and anti-Iran policy with a strategy that defines cooperation with the Lebanese state and the LAF as a desirable outcome, therefore, can only end in failure.

“It doesn’t work, and it only reinforces a pro-Iranian configuration, partly because the previous administration reconfigured its Lebanon policy to be part of its broader regional policy of realignment with Iran,” Badran explained, adding “and partly because Hezbollah controls Lebanon, its strategic orientation, and its security policy and apparatuses. In fact, Hezbollah controls the government of which Hariri is prime minister.”

Under President Barack Obama, the U.S. government promoted a strategic realignment with Iran, fueled by the nuclear agreement signed between the P5+1 nations (United States, Russia, China, United Kingdom, France and Germany) and the Islamic Republic two years ago, and promoted the LAF as a legitimate partner in the fight against ISIS. Since the LAF, however, operates based on the interests of Hezbollah, the organization is itself on the “extreme margin of that fight,” Badran argued.

The LAF’s complicity in Hezbollah’s criminal activity is most evident in Syria, where Hezbollah recently claimed several victories against Sunni jihadists in the Lebanon-Syria border region, with the help the Lebanese army.

Badran also warned against future implications of that policy, should a conflict erupt between Israel and Hezbollah, as some experts have predicted. “For what role will the LAF play if not that of a human shield for Hezbollah when the next conflict with Israel erupts?” he asked.

“What will the Lebanese government do but rush to the U.S. urging it to preserve its investment in that extraordinary partner in the war against terrorism, and to intervene to stop Israel from destroying the Lebanese state. After all, who but Hezbollah would benefit from that?” Badran concluded.