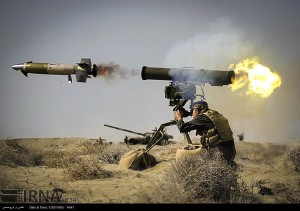 Hezbollah are using Iranian-made anti-tank missiles in Syria that could be used against Israel in a future confrontation, the Investigative Project on Terrorism (IPT) has learned.

The Toophan is a reverse-engineered version of the American military BGM-71 TOW missile, with a payload of 3.6 kg warhead that is capable of penetrating up to 550mm of steel armor.

Israel frequently has voiced concerns over Hezbollah acquiring sophisticated weaponry — including new Iranian anti-tank missiles — that could end up being utilized against in a future battle between Israel and the Shi’ite terrorist organization.

This development comes amid growing Iranian expansion in Syria and throughout the region. Since the launch of Iran’s October ground operation in northern Syria, more than 135 Iranian Revolutionary Guard Corps (IRGC) troops have been killed, according to a report written by Raz Zimmt — an expert on Iran’s political and social networks.

The commander of IRGC’s Quds Force — Qassem Soleimani — was also seen in public Jan. 21, his first appearance since he was reported injured in Syria.

Soleimani spoke at a memorial service for an IRGC brigadier general killed in an alleged Israeli airstrike in January 2015 near Quneitra in the southern Golan Heights.