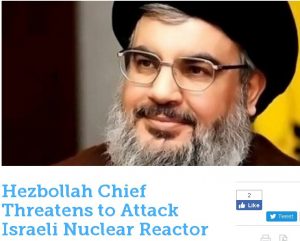 A website published by the Iran-backed terror group Hezbollah published a video clip earlier this week showing strategic sites throughout Israel that the group plans to attack, including nuclear facilities, power plants, and desalination centers, like reported by thetower.org.

Among the facilities mentioned was Israel’s nuclear research center in Dimona, which Hezbollah chief Hassan Nasrallah explicitly threatened to attack earlier this month.

“I call upon the Israelis not only to evacuate the ammonia tank from Haifa, but also to dismantle [the] Dimona nuclear facility,” Nasrallah declared. “The Israeli nuclear weapon that represents a threat to the entire region, we will turn it into a threat to Israel.”

Nasrallah was referring to an ammonia tank at Haifa’s port, which he has previously threatened to bombard with rockets. Destroying the tank would “cause a disaster whose effects could exceed that of the atom bombs dropped on Hiroshima and Nagasaki in World War II,” Prof. Ehud Keinan, a chemistry expert at the Technion-Israel Institute of Technology, warned in January.

According to the United Nations’ 2005 International Convention for the Suppression of Acts of Nuclear Terrorism, attacking the Dimona facility could constitute nuclear terrorism. An attack on such a facility could cause the release of radioactive material, which would lead to mass casualties among the surrounding population.