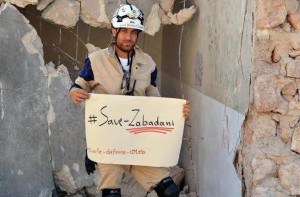 Hezbollah and the Syrian army killed six militants and captured nine as they advanced further toward the center of the Syrian town of Zabadani near Lebanon’s border.

A security source told The Daily Star that Hezbollah also lost two fighters during the last 24 hours of clashes.

The forces took over Al-Jisr neighborhood and Idrissi School, the source added, in what their commanders saw as “a major advancement.”

Hezbollah’s Al-Manar TV reported that the main street in the western part of Zabadani’s was now in the hands of the two armies, saying there was “confusion” among the ranks of militants.

The developments come two days after the collapse of a ceasefire that had halted the attacks on Zabadani in return for Syrian rebels stopping their offensives Kefraya and Foua in the Syrian Idlib province.

Hezbollah and the Syrian army’s offensive in Zabadani is largely considered an attempt by the two allies to bolster their control of land routes between Lebanon and Syria and cut rebel supply lines.

Zabadani also bears strategic significance for Hezbollah since it once served as a logistical hub for supplying the party with Iranian weapons. It also served as a base for Hezbollah fighters and the Iranian Revolutionary Guard fighting in Syria.