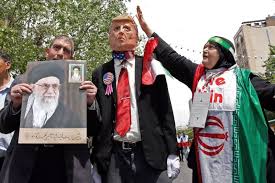 The Department of Justice also issued a press release on September 19, 2019 about this case.

It is note-worthy that Saab’s nine-count indictment includes felonies under the Immigration and Nationality Act, for engaging in immigration fraud, including naturalization fraud in that he is alleged to have lied about his involvement with Hezbollah when he applied for naturalization and subsequently became a United States citizen. Saab is also alleged to have entered into a fraud marriage for the purpose of providing another alien terrorist co-conspirator with U.S. citizenship in furtherance of their terrorist goals. U.S. citizenship provides the “keys to the kingdom.”

The official report, 9/11 and Terrorist Travel included these two excerpts about the clear nexus between immigration fraud and terrorism:

Once terrorists had entered the United States, their next challenge was to find a way to remain here. Their primary method was immigration fraud. For example, Yousef and Ajaj concocted bogus political asylum stories when they arrived in the United States. Mahmoud Abouhalima, involved in both the World Trade Center and landmarks plots, received temporary residence under the Seasonal Agricultural Workers (SAW) program, after falsely claiming that he picked beans in Florida.

Terrorists in the 1990s, as well as the September 11 hijackers, needed to find a way to stay in or embed themselves in the United States if their operational plans were to come to fruition. As already discussed, this could be accomplished legally by marrying an American citizen, achieving temporary worker status, or applying for asylum after entering. In many cases, the act of filing for an immigration benefit sufficed to permit the alien to remain in the country until the petition was adjudicated. Terrorists were free to conduct surveillance, coordinate operations, obtain and receive funding, go to school and learn English, make contacts in the United States, acquire necessary materials, and execute an attack.

In point of fact, several years ago I wrote an extensive article about the nexus between immigration fraud and terrorism. My article was entitled, Immigration Fraud: Lies That Kill – 9/11 Commission identified immigration fraud as a key embedding tactic of terrorists.

Before we delve further into this case we must connect some very important dots. Today the United States is attempting to thwart Iran’s efforts to acquire nuclear weapons. Iran is the world’s most prolific and dangerous state sponsor of terrorism. Hezbollah is a terrorist organization that is funded and directed by Iran.

Awhile back I wrote a commentary about a Congressional hearing that focused on the threats posed by sleeper cells to the United States. My piece, Congressional Hearing: Iranian Sleeper Cells Threaten U.S. provided information disclosed at the hearing and also included a link to The Washington Free Beacon report about the hearing under the unambiguous headline, Iranian-Backed ‘Sleeper Cell’ Militants Hibernating in U.S., Positioned for Attack.

Now that we have put the case of the defendant in the case, Alexei Saab, a/k/a “Ali Hassan Saab,” a/k/a “Alex Saab,” a/k/a “Rachid,” into proper context in terms of the broader issue of the national security / public safety threats posed by Hezbollah and other terrorist sleeper agents operating inside the United States, we need to go back and take a closer look at facts and allegation provided in the federal Criminal Complaint and Criminal Indictment as provided in the above-noted press releases.

To begin with, according to the allegations, Saab joined Hezbollah in 1996 and legally entered the United States nearly 20 years ago, in 2000. There was no mention as to the visa he used to enter the United States but it was disclosed that he applied for U.S. citizenship in 2005 and was subsequently naturalized in 2008.

In 2005 he traveled to Turkey to receive training in weapons, explosives and surveillance techniques and to be debriefed by his handlers about the results of his surveillance of potential terror targets in New York City, Washington, DC and elsewhere and that during one of his trips outside the United States he tried, unsuccessfully, at Hezbollah’s direction, to kill a man they believed to be an Israeli intelligence agent.

For nearly 20 years this sleeper agent lived quietly among his neighbors in New Jersey. How-ever, his ultimate goal was to participate in a deadly terror attack to slaughter many victims.

If not for the work of the law enforcement officers who ultimately, through information provided by an informant, it is entirely possible that he would have gone on to carry out a deadly attack.

Saab is only the latest of many alien sleepers who have been discovered and arrested.

For example, on June 8, 2017 the Department of Justice issued a press release, Two Men Arrested for Terrorist Activities on Behalf of Hizballah’s Islamic Jihad Organization.

However, how many more terrorists are still living among us, waiting for their instructions calling upon them to carry out deadly terror attacks?

Globalists and immigration anarchists vilify ICE agents and insist that it is unfair to arrest aliens who have no serious criminal histories.

As a rule, sleeper agents do not have criminal histories. This is a significant part of their methodology. It has been said that a good spy is someone who would not attract the attention of a waiter or waitress at a “greasy spoon diner.”

The same can be said of an effective sleeper agent. In point of fact, that waiter or waitress might well be a spy or a terrorist.

The threats are real, yet the leaders of the Democratic Party insist that we throw open our borders and stop enforcing our immigration laws. Sanctuary cities shield some truly dangerous aliens.

The second largest contingent of federal agents who are assigned to the Joint Terrorism Task Force (JTTF) are immigration law enforcement officers because, as we see in this case, alien terrorists invariably violate our immigration laws.

The best way of uncovering immigration fraud is not to pass more laws but to hire more agents who can conduct those vital investigations. Political leaders from both political parties have advocated a massive program to legalize unknown millions of illegal aliens in the United States.

There would be no way to interview those illegal aliens, let alone conduct field investigations. Such a program would irrevocably undermine national security and constitute an act of national suicide.

Suicide is not an act of compassion.