You are here: Home / Mediterranean / Hezbollah shows off U.S.-made tanks in parade 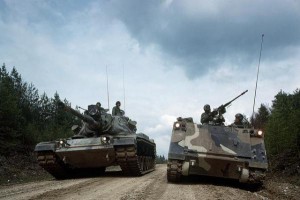 Hezbollah showed off U.S.-made tanks in a parade in Syria, which some thought were stolen from Lebanon, but U.S. military officials say that is impossible because they gave the Lebanese military a different model.

Images of the parade, held in Qusayr, Syria, are raising concern about terror groups in the Middle East using U.S. military armored personnel carriers distributed as part of aid to various nations in the region.

While some have suggested the tanks were taken from the Lebanese Armed Forces, which the United States has been supporting in its battle against militant groups in Lebanon. Last summer, the U.S. gave the military about $50 million worth of equipment, including vehicles, grenade launchers and tons of ammunition.

The M113 armored personnel carrier, or APC, has been used in every major U.S. military conflict since the Vietnam War. The vehicle has also been given or sold to other countries around the world as part of aid packages, in addition to being used by many police departments in the United States.

U.S. officials say the model M113 Hezbollah has may have come from the Southern Lebanese Army, which Israel supplied with military equipment — including 20 M113s — from 1984 until 1996. Hezbollah may also have taken them from the al-Qaeda-linked Jabhat al-Nusra, but officials are also unsure how they got their M113s.