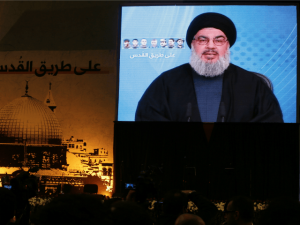 The leader of Lebanon’s Hezbollah movement, Sayyed Hassan Nasrallah, said on Tuesday the Middle East was in a phase of escalating tension and there appeared to be no prospect of a political solution to the war in Syria.

“The regional scene is currently one of tension and escalation, and it does not appear that there are paths for negotiations or solutions”, he said in a rare live televised speech before thousands of supporters in Beirut.

Speaking about Syria, where the Iran-backed group is fighting alongside Syrian President Bashar al-Assad, Nasrallah said “the theatre was open to more tension, escalation and confrontation”.

Nasrallah said the Saudi leadership were pushing their country to “the abyss” and accused Riyadh of being responsible for an air strike on a Yemeni funeral in the capital Sanaa on Saturday that killed scores of people.

Saudi Arabia, which backs Syrian rebels, earlier this year marshalled other Arab states to denounce Hezbollah as a terrorist group, part of Riyadh’s efforts to contain Iran’s influence and reduce its ability to support Assad.

Hezbollah denies being involved in terrorism and Nasrallah accused Saudi Arabia of supporting terrorism in his speech on Tuesday.

The thousands of Hezbollah supporters in the crowd, mostly dressed in the traditional dark colours worn by Shi’ites at Ashura, were shown repeatedly chanting “Death to the Al Saud”, Riyadh’s ruling dynasty, while pumping their fists in the air.