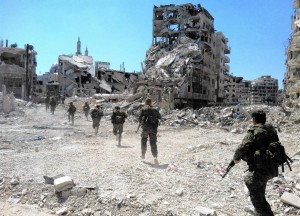 Forces backing the Syrian regime, Russia and Iran-proxy Hezbollah, stepped up the alertness of its units based in eastern Syria, like reported by aawsat.com.

The sharpened presence is poured in an effort to counter an expansive attack staged by ISIS hardliners desiring to take over the eastern city of Deir al-Zor.

Even though Hezbollah militants have set foothold in Deir al-Zor, some eight months ago, a mayday was dispatched by the group calling for air support to thwart the ISIS-led offensive against the regime enclave.

Syrian Observatory for Human Rights Director Rami Abdulrahman confirmed that numbers of incoming Hezbollah militants have been registered arriving at the city’s airport.

Moalimi strongly defended that the Syrian people must be given the right to unconditioned self-determination, particularly in what concerns its political future.

The Saudi ambassador, stressed the importance of resolutions issued by the U.N. General Assembly, with respect to human rights in Syria as well determination to establish a divisive mechanism which gathers evidence and inklings, documenting information that could be used to hold those committing war crimes accountable for their actions.

The diplomat worded Saudi Arabia’s keenness to continue participating in all international efforts spent to bring about peace and stability in Syria. Moalimi welcomed the Security Council’s resolution No. 2336, which stressed the need to work on an exact political transition in Syria, according to the Geneva statement and decisions formerly issued by the body.