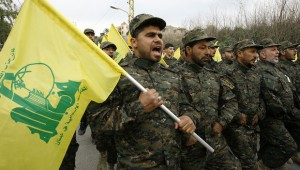 Hezbollah and the Syrian army are unlikely to launch an all-out offensive against Islamist militants based in the Qalamoun region, but are determined to cut off all access ISIS and the Nusra Front might have to any towns in Lebanon or Syria, security sources said Monday.

“Hezbollah, after an in-depth military assessment study, concluded that there was no need for a costly wide-scale offensive,” a security source told The Daily Star. “They have opted to contain the militants, cut off their supply routes by fire and keep them isolated in the highlands of the rugged mountains.”

The source dispelled fears of what Lebanese politicians and media have dubbed a looming “decisive battle” in Syria’s Qalamoun region, despite what appeared to be a pre-emptive attack launched by Islamist militants on Hezbollah and Syrian army positions in the western mountain range at dawn Monday, according to security sources in the Bekaa Valley.

The sources said the fierce clashes that erupted caused a number of dead and wounded on both sides.

A security source said the Nusra Front, Syria’s Al-Qaeda affiliate, and allied Islamist factions deployed thousands of fighters who took up positions overlooking Hezbollah and Syrian army outposts in the towns of Wadi Barada, Al-Kfeir, Zabadani, Serghaya and Hreira near the Lebanese border.

The militants pounded the towns with rockets, surface-to-surface missiles and mortar bombs, the source said, adding that the casualty toll was high, without being able to provide a figure.

Another source said he could confirm at least one Hezbollah fighter from Baalbek was killed in the attacks.

Militants also launched an attack on the Qalamoun town of Al-Juba, strategically located near the highway linking Damascus to Homs, according to another security source.

The militants seized at least two Hezbollah tanks and destroyed others during clashes outside the town.

A Qalamoun source said that some fighters withdrew from the Syrian towns and headed west toward Lebanon, while fierce clashes between Hezbollah and the militants persisted in some areas.

Syrian areas that lie in proximity to the outskirts of the Lebanese border town of Brital also saw fierce fighting between Hezbollah and Islamist militants.

Clashes began after Nusra Front militants and members of theIslamic Brigade attacked Hezbollah positions on the outskirts of the Lebanese border enclave of Tfail, the Qalamoun town of Jreijeer and the village of Assal al-Ward, which is located near Arsal.

Hezbollah officials could not be reached for comment on the Qalamoun clashes. But Hezbollah’s Al-Manar TV reported that the Syrian army and its allies foiled an attack carried out by militant groups on the outskirts of Jibba and Assal al-Ward in Qalamoun.

Security sources cited by the TV said that a number of Islamist militants were killed or wounded, and their vehicles were destroyed as they attempted to attack Syrian army posts on the outskirts of the towns.

A source close to the Nusra Front confirmed the Qalamoun fighting. “This is the zero hour and the battle in the region has begun,” the source told AFP.

A Syrian source on the ground also described the clashes in the area.

“The Syrian army and its allies blocked an attack by armed groups on army positions near the border with Lebanon,” the source told AFP. He said a number of opposition fighters were killed and wounded when pro-government forces ambushed them and destroyed their equipment.

Last year, government forces backed by Hezbollah managed to expel rebels from most of Qalamoun, which lies north of Damascus and runs along the Lebanese border. But opposition fighters remain entrenched in the mountainous area along the border with Lebanon, and have launched attacks from there.

Instead of withdrawing into Syrian territory, fighters positioned themselves in surrounding areas from which they waged their bombardment.

The attack comes one day after the Nusra Front announced that it was training its fighters on the use of anti-tank weapons in in Qalamoun, ahead of an anticipated battle with Hezbollah and the Syrian army.

Meanwhile, the Lebanese army said Monday it arrested 12 people wanted over attacks on soldiers and possession of illegal weapons, in addition to a man suspected of links to a terror group.

The army said in a statement 10 people were apprehended in the southern suburb of Burj al-Barajneh and the northeastern suburb of Fanar. The army seized light weapons and drugs in their possession.

In the southern suburb of Sabra, the army arrested Safi Sobhi Droubi, who has multiple warrants out for him over throwing hand grenades, shooting incidents and robberies. Up north, in the Tripoli neighborhood of Qibbeh, Ibrahim Sayyed Abdallah was arrested for allegedly opening fire on a Lebanese Army outpost in Beddawi that left one soldier dead.

The army also arrested Mohammad Omar Saadeddine in Arsal on suspicion of belonging to a terrorist organization, and seized a handgun and ammunition in his possession.

A judicial source told The Daily Star that all 41 were charged with rioting, sabotage, setting mattresses ablaze, kidnapping and assault. Three of them were also charged with instigating the mutiny, the source added.