You are here: Home / Mediterranean / Hezbollah procured hundreds of tons of ammonium nitrate from Iran 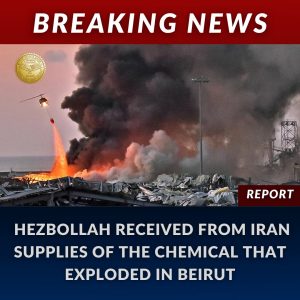 Hezbollah purchased and received hundreds of tons of ammonium nitrate from Iran in 2013 and 2014, the German Welt paper reported on Wednesday, citing Western intelligence sources.

According to WELT, Iran’s Revolutionary Guards made three deals with Hezbollah at the price of nearly 400,000 Euros between July 2013 and April 2014 – and delivered the goods via land, air and sea.

The smuggling was executed by Hezbollah’s logistics chief Mohammed Qasir. On the Iranian side, the deal was overseen by Quds Force commander Qassem Soleimani – who was assassinated by the United States earlier this year in Iraq – as well as Seyyed Mojtaba Moussavi and Tabar and Behnam Shahriyari.

A stock of 2,750 tons of the chemical exploded in Beirut port on August 4, devastating Lebanon’s capital and killing 180 people in one of the biggest blasts in recorded history. However, there is no information linking Hezbollah to the explosion or suggesting that the port stock had originated in Iran.

The explosion was triggered when the stock of ammonium nitrate caught fire. An Israeli analyst said seismological data suggests that six blasts at 11-second intervals preceded the large explosion.

Who was responsible for the explosions and stock has yet to be determined. However, documents have emerged showing the country’s top leadership and security officials were aware of the chemicals stored at the port.

Hezbollah leader Hassan Nasrallah said he did not trust any international investigation, adding that any international probe would likely seek to clear Israel of any responsibility in the port explosion. He has denied any connection to the blast or chemical stock, and said the cause of the explosion is still unclear.

Initial information on the blasts suggested that the ammonium nitrate stock had arrived in Beirut port aboard the Rhosus ship sailing from Georgia to Mozambique. Before leaving the Mediterranean, the ship’s captain and two crew members say they were instructed by the Russian businessman they regarded as the ship’s de facto owner to make an unscheduled stop in Beirut and take on extra cargo.

The Rhosus arrived in Beirut in November but never left, becoming tangled in a legal dispute over unpaid port fees and ship defects. Creditors accused the ship’s legal owner, listed as a Panama-based firm, of abandoning the vessel and the cargo was later unloaded and put in a dockside warehouse, according to official accounts.

The empty ship eventually sank where it was moored in 2018, according to Lebanese customs.