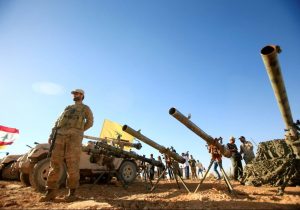 Hezbollah, an Islamist terrorist organization based in Lebanon, is perfecting its ability to strike at America within its homeland, a senior US counterintelligence official said according to jpost.com.

“While I’m not here to speak publicly about any specific, credible or imminent threat to the homeland, we in the intelligence community do in fact see continued activity on behalf of Hezbollah here inside the homeland,” Rasmussen said. “It is our assessment that Hezbollah is determined to give itself a potential homeland option as a critical component of its terrorism playbook​.”​

“We are watching very closely for additional signs of that activity,” he added.

Rasmussen announced rewards in the millions of dollars for information on two individuals aiding Hezbollah’s cause: Talal Hamiyah and Fu’ad Shukr. Both men are involved on planning attacks outside of Lebanon or against Americans and their allies.

“With all of the focus on ISIS and al Qaeda, I can assure you that those of us who are focused on terrorism for the entire period since 9/11 have never taken our eye off of the Hezbollah threat,” Rasmussen said.

Hezbollah, which self-identifies as a Shia militant group, relies on support from Iran for its arms. US President Donald Trump plans to deliver a speech outlining his “comprehensive policy” toward Iran and its proxy organizations on Thursday.