You are here: Home / Europe / Hezbollah might be providing weapons to New IRA 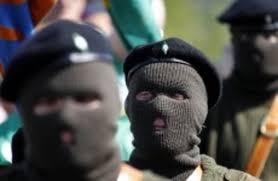 The report was based on information collected by an MI5 agent, Denis McFadden, over the past two decades.

McFadden, the report said, was now in a witness protection program after the arrest of 10 people in Northern Ireland on terrorism-related charges.

Contacts between Hezbollah and the New IRA were alleged to begin in 2017, with members of the Irish group travelling to Lebanon the following year.