You are here: Home / MidEastGulf / Hezbollah kills group of Nusra militants in Qalamoun 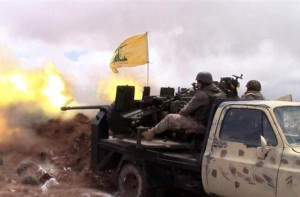 Al-Manar Wednesday said a group of Islamist militants were killed in a Hezbollah ambush in Syria’s Qalamoun region along the border with Lebanon.

“All members of a group of Nusra militants were killed in an ambush by the resistance” between the Syrian outskirts of the Lebanese towns of Arsal and Nahleh, Hezbollah-run Al-Manar TV said.

It said the jihadi group, spotted by a reconnaissance plane, was planning to carry out a “terrorist attack” from quarries south of Arsal.

Al-Manar said the group belonged to Nusra’s Ghuraba Brigade, adding that a field commander was among those killed.

It said the ambush also destroyed a Nusra military vehicle.

The report comes one day after a security source revealed that six Hezbollah fighters were killed in Qalamoun as they attempted to take the Tallaja hilltop from Nusra militants earlier this week. The source said they were killed in sniper fire Monday.

But Hezbollah managed to take control of two other hills after clashes that left about 30 jihadis dead.

Al-Manar Tuesday aired a report from the outskirts of the Syrian town of Flita, saying that areas surrounding the town had fallen under the total control of Hezbollah and the Syrian army, exposing routes used by jihadis to gunfire.

Monday’s deaths brought the number of Hezbollah fighters killed in the Qalamoun offensive since it began on May 4 to at least 22. The number of jihadi casualties since the start of the operation is unclear, but is likely to be in the hundreds