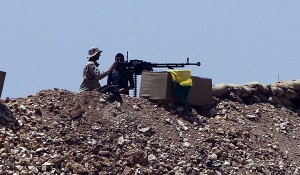 At least 22 al-Nusra members were killed as fighters of the Lebanese Resistance Movement Hezbollah continued to press ahead with their military campaign against the terror group on the outskirts of the Northeastern border town of Arsal.

According to media reports, Hezbollah fighters continued their assault on the defensive positions of Al-Nusra Front in the district of Jaroud, Arsal, killing 22 militants and destroying two armored vehicles mounted with machine gun turrets.

The latest developments came as Hezbollah are carrying out clean-up operations in the Southeastern barren region.

The fighters of the Lebanese Resistance Movement Hezbollah have made major gains in their fight against terrorists over the past weeks.

The areas of Majr al-Hamra and Shamis al-Hamra were also cleared of the terrorists on June 3.

The Syrian army and the resistance fighters have been for weeks engaged in a wide-scale operation to secure the barrens of Qalamoun. This area lies on the border between Syria and Lebanon and is considered as stronghold for the Syria-based militants.