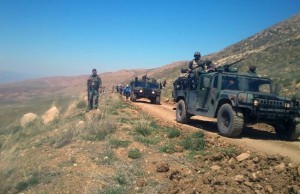 The source told The Daily Star that Hezbollah fighters also destroyed six vehicles belonging to the Al-Qaeda affiliate in the ambush in a Syrian village east of the Lebanese border enclave of Tfail.

A separate security source said that fighting was ongoing on the outskirts of Tfail and the eastern Lebanese border town of Brital.

The source also told The Daily Star that lighter clashes were ongoing in the Qalamoun villages of Assal al-Ward and Al-Juba.

Tuesday’s clashes erupted one day after the Nusra Front and allied rebels launched a series of brazen attacks against Hezbollah and Syrian army posts along a stretch of the Qalamoun region.

In Baalbek, residents could hear the sound of heavy gunfire from a funeral procession of a Hezbollah fighter who allegedly died during Monday’s battles.

Also on Tuesday, a coalition of Islamist groups operating in Qalamoun announced the formation of the “Army of Conquest – Qalamoun.”

It was unclear if the the group, which made its announcement over Twitter, was a branch of the Army of Conquest, another umbrella of Islamist Syrian rebel group operating in other parts of the country established earlier this year.

The group declared itself a full-fledged coalition after receiving support from “most” Syrian rebel groups in Qalamoun, it wrote on Twitter.