You are here: Home / MidEastGulf / Hezbollah is ready to stop fighting in Syria’s civil war 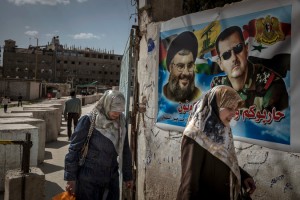 With a ceasefire now in effect after months long battle for the last Syrian rebel stronghold on the Lebanese border, Hezbollah has said it will stop fighting in Syria, a diplomatic source has told Lebanon’s Daily Star.

The unnamed source said the group informed Syrian authorities that once the fighting for Zabadani was over, it would end its combat in Syria where analysts say it has significantly strengthened pro-government forces since 2013.

In July, pro-government forces launched an offensive to try to recapture Zabadani, about 40km outside of Damascus, which prompted a rebel alliance to besiege Fuaa and Kafraya, the only remaining government-held villages in Idlib province whose residents are Shia.

On Sunday, a ceasefire went into effect between pro-government forces and rebels in Zabadani in exchange for ceasefires in Fuaa and Kafraya.

On Tuesday, the ceasefire was reportedly extended, although the warring parties have not specify when it will end and rival sides will continue negotiations for a broader truce.

It was not clear from the unconfirmed report whether Hezbollah had already stopped fighting Syria or would soon, though experts say the group’s exit from the civil war would not be a suprise.

“Hezbollah does not have a natural vocation to be involved in this conflict, but had to act nevertheless – and significantly – due to the deficiencies of the Lebanese self-defence capacity and the weakening of the Syrian regular army,” Filippo Dionigi, a Leverhulme Fellow at the London School of Economics’ Middle East Centre and an expert on Hezbollah, told Middle East Eye.

De-escalating at a well-timed moment, Dionigi said, would give the group an opportunity to withdraw while also maintaining public face and being able to assert that it had defended Lebanon successfully.

“Hezbollah not only knows how to fight but also how ‘to win’ wars,” he said. Stepping out at a conveniently timed moment is a way to do this.

It was only this May that Hezbollah leader Hassan Nasrallah – who is reportedly scheduled to give a speech on Friday – publicly acknowledged that the group was fighting in support of Syrian President Bashar Assad’s government.

Nasrallah has framed his group’s intervention as one which protects Lebanon from the Islamic State militant group, a notion that has raised tensions in the country where many Sunnis back the fight against Assad.

But also critical for the group is the role the Syrian government has played as a conduit for weapons and funding between Iran and Hezbollah and, while also providing a safe haven for Hezbollah training camps and weapons storage, according to a report from the Washington DC-based Institute for the Study of War.

The exact size and scope of the group’s activities in Syria has been murky. In July, Foreign Policy magazine, quoting Western officials and analysts, have put the number of fighters on the ground at between 6,000 and 8,000 and some reports suggest the group’s has suffered the heaviest death tolls in its history inside Syrian territory.

While it is difficult to know exactly what Hezbollah plans to do next in Syria, Dionigi said a “progressive disengagement from this conflict and a ‘going back to the roots’ of Lebanon’s defence is probably the main strategic horizon that Hezbollah may contemplate at least once all its interests in Syria are guaranteed.”