You are here: Home / Mediterranean / Hezbollah has dug tunnel network from Beirut to 3km from Israel border 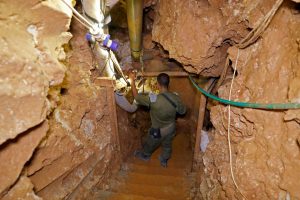 The Hezbollah terror group has dug a network of tunnels hundreds of kilometers long from Beirut to southern Lebanon, the Kan public broadcaster reported Monday.

The network was dug in parallel to six Hezbollah attack tunnels into Israel, which the Israel Defense Forces exposed and destroyed in 2018, Kan said.

The purpose of the additional network is reportedly to enable the swift and covert movement of forces during a war against Israel.

According to the report, command and control headquarters have been built inside the tunnel network, with the tunnels reaching to some three kilometers from the Israeli border.

The IDF conducted Operation Northern Shield between December 2018 and January 2019, in an effort to locate and destroy tunnels dug by Hezbollah into northern Israel from southern Lebanon.

In total, the military said, it found six such passages and rendered them inoperable — either using explosives or filling them with concrete.

The IDF said the six tunnels were built with the specific purpose of enabling thousands of Hezbollah terrorists to stage an infiltration attack on military and civilian targets in northern Israel as a surprise opening maneuver in a future war.

The military said the discovery and destruction of the tunnels removed what otherwise would have been a potentially devastating weapon in Hezbollah’s arsenal.

In January 2020, the IDF began installing a series of underground sensors along the northern border in order to detect any new subterranean tunnels being dug into Israeli territory from Lebanon.

Israel has fought two wars in Lebanon, one in 1982 against Palestinian terrorist groups and another in 2006 against Hezbollah, as well as a number of smaller operations.

Though seen as volatile, the border has not seen significant fighting since the end of the 2006 war.

An unnamed Lebanese official told the London-based Arabic-language newspaper Asharq Al-Awsat on Sunday that Hezbollah does not want to expand the ongoing fighting in the Gaza Strip to Lebanon.

Though there have been some clashes on the Israel-Lebanon border in support of the Palestinians, the Iran-backed Hezbollah was reportedly not intending to launch its own attacks.

Six rockets were fired from Lebanon toward Israel late Monday, but they apparently fell short of the border fence. The military said it responded with artillery fire. The IDF believes a small Palestinian faction — not Hezbollah — was responsible for the attack, military spokesperson Hidai Zilberman said on Tuesday morning.