You are here: Home / Mediterranean / Hezbollah has 10,000 fighters in Syria ready to confront Israel 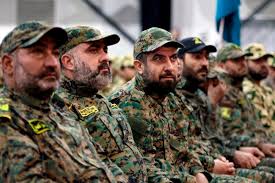 Hezbollah has more than 10,000 fighters in southern Syria ready to confront Israel, a commander for the Iranian-backed Lebanese terror group has said, according to toi.com.

“Hezbollah has over 10,000 fighters deployed in southern Syria. Hezbollah is an army of infantry, rockets, tanks, elite forces,” the Hezbollah officialtold the Middle East Eye this week, amid tensions surrounding the shooting down by the Israeli Air Force on Tuesday of an Iranian-built drone launched by the group as it attempted to cross into airspace.

“We are operating as we do in south Lebanon, but of course in a veiled manner,” he said.

Speaking of the truce in southern Syria, under the auspices of Russia and the United Nations, the commander said that the “de-escalation plan is better for us. We are working with more freedom, there are no more bombings.”

The commander said that the next war with Israel may start from Syria but “what really matters is where will it end, will it be in Netanya, Haifa or Kiryat Shmona?”

On Tuesday, Israel used a Patriot missile to shoot down the drone launched by Hezbollah and scrambled fighter jets to the area where the device was set to cross into Israeli airspace, but ultimately did not need to use them as the interceptor missile was able to destroy the target.

The Patriot interceptor missile was launched from a military installation in northern Israel, near the city of Safed.

After the drone breached the “Bravo line” that marks the Syrian border and entered the demilitarized zone — but not Israeli airspace — the IDF “decided to intercept it,” army spokesperson Lt. Col. Yonatan Conricus said Tuesday.

In a statement, the IDF said it “will not allow any infiltration or approach toward the Golan Heights area by terrorist figures from Iranian forces, Hezbollah, Shiite militias or Islamic Jihad.”

According to Conricus, the air force monitored the unmanned aerial vehicle from its take-off at Damascus airport to the demilitarized zone that separates the Israeli and Syrian Golan Heights.

“We monitor everything that flies toward the State of Israel and follow it closely for any potential threat,” he said.

Conricus said Military Intelligence was able to identify the drone as Iranian-built and Hezbollah-launched based on the army’s arrays of sensors in the area and its years of experience monitoring the group.

The spokesperson said the drone appeared to be performing reconnaissance mission in the area. It was not immediately clear if the drone was armed.

Shortly after the incident, Defense Minister Avigdor Liberman warned that any country or terrorist group that threatens Israel will “pay a dear price, very dear.”

The debris from the drone landed near the Syrian city of Quneitra so the IDF was not able to recover it, he said.

The Patriot missile system was designed by the United States to intercept incoming missiles and aircraft. It has been deployed in Israel since the 1990s, but first saw anti-aircraft combat during the 2014 Gaza war, when a battery shot down an unmanned Hamas aircraft over the port of Ashdod.

Israel has long been concerned by its nemesis Iran’s ongoing efforts to establish itself in southern Syria, near the Golan Heights.

Jerusalem fears that the Iranian presence in that area would serve as a springboard for terrorist groups to attack Israel in the future.

Prime Minister Benjamin Netanyahu has reportedly been negotiating with his counterparts in the United States and Russia to establish an Iran-free area around surrounding the border, but to no avail yet.

Earlier this month, tens of thousands of Israeli soldiers participated in the largest military drill since 1998, simulating war with Hezbollah for 10 days.

The exercised was named “Or HaDagan” after Meir Dagan, a former Mossad chief and IDF general who died last year.

Israel last fought a full-scare war with Hezbollah in 2006’s Second Lebanon War, and tensions have remained high even as the northern border has remained relatively quiet since.

This exercise was touted as a chance to practice failures or military shortcomings exposed during the war.

Led by Hassan Nasrallah, Hezbollah is believed to have an arsenal of between 100,000 and 150,000 short-, medium- and long-range missiles and a fighting force of some 50,000 soldiers, including reservists.

While Israeli military officers often discuss a future conflict with the terrorist group as a matter of “when, not if,” the assessment of the IDF is that Hezbollah is not currently interested in renewed warfare with Israel at present, due to its active involvement in the Syrian civil war, which have caused it significant strategic problems.