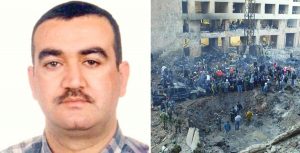 A UN-backed tribunal on Tuesday (18 August) found a member of the Hezbollah Shiite movement guilty over the 2005 murder of former Lebanese prime minister Rafic Hariri.

The long-awaited decision prompted mixed reactions, with the late Hariri’s son Saad telling journalists outside the Special Tribunal for Lebanon (STL) he “accepted the tribunal’s verdict.”

“Everybody’s expectation was much higher than what came out today, but I believe that the tribunal came out with a result that is satisfying. We accept it,” said Saad Hariri, also a former prime minister, after attending the hearing at the STL’s heavily fortified courthouse.

Salim Ayyash, 56, was convicted in absentia by the STL based in the Netherlands, over a huge suicide bombing in Beirut that killed the Sunni billionaire politician and 21 other people.

“The trial chamber finds Mr Ayyash guilty beyond reasonable doubt as a co-perpetrator of the assassination of Rafic Hariri,” said David Re, presiding judge of the tribunal.

Addressing victims of the attack, he said: “We sincerely hope the verdict today will give you some sort of closure.”

But judges said there was not enough evidence to convict Assad Sabra, 43, Hussein Oneissi, 46, and Hassan Habib Merhi, 54, over the blast, which changed the face of the Middle East.

The judges also said there was no evidence to directly link Syria — the former military overlord in Lebanon — or Hezbollah’s leadership to the attack.

Sentencing for Ayyash will be decided at a later date. He faces life imprisonment if he is ever brought before the court.

Hezbollah chief Hassan Nasrallah has refused to hand over the four defendants and rejected the court’s legitimacy.

Judges said there was sufficient evidence to show that Ayyash was at the centre of a network of mobile phone users who scoped out Hariri’s movements for months before his assassination.

A still-unidentified suicide bomber driving an explosives-laden Mitsubishi truck blew himself up as Hariri’s motorcade passed on the Beirut waterfront on Valentine’s Day in 2005.

Prosecutors had said Ayyash was a ringleader of the group, while Oneissi and Sabra allegedly sent a fake video to the Al-Jazeera news channel claiming responsibility on behalf of a made-up group. Merhi was accused of general involvement in the plot.

The judges said evidence also linked phones used in the attack to Hezbollah commander Mustafa Badreddine — who was indicted by the court but is believed to have been killed in the Damascus area in May 2016.

The Hariri bombing triggered mass protests that drove Syrian forces out of Lebanon after three decades.

But the court said there was not enough evidence to tie Damascus to the crime.

“Syria and Hezbollah may have had motives to eliminate Mr Hariri and his political allies, however there is no evidence that the Hezbollah leadership had any involvement in Mr. Hariri’s murder and there is no direct evidence of Syrian involvement,” Re said.

Nevertheless, US Secretary of State Mike Pompeo, welcoming the verdict, said it “helps confirm what the world is increasingly recognizing — that (Hezbollah) and its members are not defenders of Lebanon as they claim to be but constitute a terrorist organization dedicated to advancing Iran’s malign sectarian agenda.”

An EU spokesperson said “the European Union reiterates the need to fight impunity and strengthen accountability and the rule of law at the international level”.

“We hope that the judgment today will be given appropriate follow-up,” the EU statement added.

A lawyer for Oneissi slammed the prosecution’s case, saying “it was obvious from the start it would not hold,” against his client.

He was happy for Oneissi, but at the same time sad that hundreds of millions of dollars (euros) was spent on “such an empty dossier and on evidence that was obviously poor from the start,” Vincent Courcelle-Labrousse told journalists.

The hearing opened with a minute’s silence for victims of the explosion that devastated Beirut two weeks ago, killing 177 people. The verdicts were initially scheduled for August 7 but postponed because of the blast.

The UN Security Council agreed in 2007 to establish the court billed as the world’s first international tribunal set up to probe terrorist crimes.

It opened its doors in 2009, although the Hariri trial itself did not formally start until 2014.

The court has cost at least $600 million to operate and has so far heard only four cases, two of them for contempt of court about news reports with information about confidential witnesses.

Hariri was Lebanon’s Sunni premier until his resignation in 2004 over Syria’s role as powerbroker in the country.

Judge Re said Hariri’s assassination was “political” and was prompted by his decision to move away from Syria and the sending of representatives to an opposition meeting where participants agreed to call for Damascus’ immediate and total withdrawal from Lebanon.

Observers have voiced fears that the verdict, whichever way it went, could spark violence on the streets in Lebanon.

Tuesday’s verdict came as thousands of Beirut residents have expressed anger at the authorities after the port blast triggered by a warehouse fire that set off large amounts of stored ammonium nitrate.