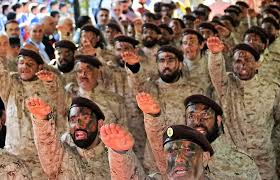 The Lebanese Hezbollah and its Amal Movement ally are predominantly responsible for the latest failure to establish a new government in Beirut. Putting their cronyism first, the two parties have shown their hands, like reported by washingtonexaminer.com.

The failure was formalized after Prime Minister Hassan Diab resigned this weekend. Diab concluded he would be unable to persuade Hezbollah to support his reformist efforts. This provoked President Emmanuel Macron of France to condemn the acquiescence of responsibility. “I’m ashamed of the Lebanese political leaders” and their “collective betrayal” of the people, Macron said. The French president, who has been attempting to mediate a reform process, is right to be furious. Lebanon has been caught in a state of chaos for more than a year now, with various partisan interests preferring their own retention of power to the better service of the people. But with an anemic economy and grotesque political corruption, Lebanon is in desperate need of major political reform. This concern was only exacerbated following the catastrophic Beirut port explosion in early August, which killed nearly 200 people.

As I say, Hezbollah is the primary architect of this catastrophe. Refusing to compromise on the appointment of ministers and control over the powerful Finance Ministry, Hezbollah has obstructed Diab from the reforms his nation so desperately needs. Diab’s necessary priority has been a move away from crony politicians to the appointment of technocratic ministers outside of the grasp of sectarian interests. That was something Hezbollah couldn’t stomach, realizing that its own militia and patronage-based political power would suffer under the light of a new democratic order. Hezbollah leader Hassan Nasrallah is due to speak on the crisis on Tuesday. But he’s very unlikely to offer any new compromises. Instead, Hezbollah seems to have bet that it can wait out this situation by gambling that no one will have the resolve to demand its reform. Considering Hezbollah’s manifest penchant for avoiding responsibility for its excesses, its gambit may well succeed.

Predictably, Hezbollah enjoys the support of corrupt Amal leader and Speaker of the Parliament Nabih Berri in this endeavor. President Michel Aoun also deserves a significant share of the blame. The geriatric master of Lebanon’s major Christian party, the Free Patriotic Movement, Aoun has thrown in his lot with Hezbollah. Were he to demand reforms, Hezbollah would quickly find itself outvoted in Parliament. Instead, Aoun has made himself Hezbollah’s useful idiot.

The crisis is growing. Denied basic living standards and increasingly skeptical that peaceful politics will deliver their better future, a large swathe of the Lebanese people will find new temptation to take up arms. A new civil war is a very real possibility.