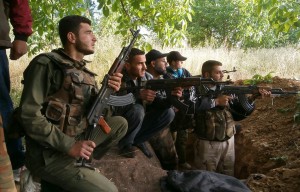 Hezbollah fighters killed at least four members of the al Qaeda-linked Nusra Front in a rocket attack on their car in northeastern Lebanon on Tuesday, Feb 2, a security source said, according to Reuters.

The incident took place in a restive area near the Syrian border, just outside the Lebanese town of Arsal, which Nusra Front and Islamic State fighters overran briefly in 2014 before withdrawing after clashes with the army.

Shi’ite Hezbollah has previously targeted Sunni Islamist fighters in the area who have staged regular incursions from Lebanon’s war-torn neighbor.

Nusra Front and Islamic State – themselves enemies in Syria’s conflict – have in the past week clashed in the outskirts of Arsal. Nusra Front initiated the fighting with its jihadist rival by trying to capture IS positions in the area, Reuters quoted the source as saying.

IS counter attacked, pushing Nusra Front out of positions it controlled east of Arsal.

The clashes killed several fighters on each side, the source said.

Nusra Front freed 16 Lebanese soldiers and policemen in December in exchange for the release of jailed Islamists. It had captured the soldiers during the Arsal incursion in 2014. IS is believed to be still holding nine soldiers it captured.

The Arsal incursion and the continued presence of Nusra Front and Islamic State in the border area in northern Lebanon are an example of the spillover from the five-year-old Syrian conflict. The spillover has also included bombings, such as an IS-claimed suicide attack in November that killed more than 40 people in Beirut.