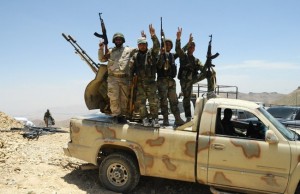 Hezbollah and the Syrian army captured fresh territory from ISIS outside a northern Qalamoun town Tuesday, in a move that saw renewed clashes with the militant group, Al-Manar TV reported.

The Hezbollah-run channel said the allied forces took over the areas of Tallat Ras Al-Kosh and Qornat Ras Al-Sahbah on the outskirts of government-held Jarajeer, in an advance that left scores of militants either dead or wounded.

Last week, Hezbollah repelled an ISIS attack in northeast Lebanon, losing eight fighters and killing at least 14 militants, in the largest confrontation between the two groups since the Lebanese party joined the Syrian war three years ago.

Hezbollah and the Syrian army have been battling terrorists in Syria’s Qalamoun mountain range along Lebanon’s eastern borders for more than one month.

The allied forces have achieved major field victories, taking 64 percent of the Qalamoun hills in roughly 5 weeks, according to Al-Manar.

At least 39 Hezbollah fighters and 244 militants have been killed since the launch of the Qalamoun offensive on May 4, according to a source close to Hezbollah.