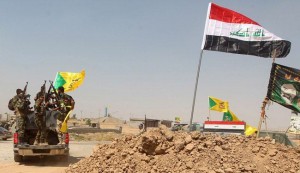 Hezbollah Brigades in Iraq announced on Tuesday foiling a major ISIS attack southeast of Fallujah, while indicated that they were able to kill 23 components of ISIS elements, noting that, “ISIS executed its militants, who had withdrawn from the attack.

The brigades said in a statement issued today, and received by IraqiNews.com,” a force from Hezbollah Brigades has managed to repel a major attack to ISIS southeastern Fallujah,” indicating that “The attack lasted for more than five hours.”

“the force  has managed to kill 23 ISIS elements  during the attack and has wounded dozens of them as well as the damage of four mechanics that were carrying weapons,” pointing out that “ISIS executed 12 insurgents  that had withdrawn during the attack,” Hezbollah Brigades added.