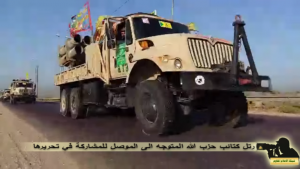 The convoy, which was seen in a video released by Hezbollah Brigades propaganda wings, was shown to include dozens of vehicles. At least 11 rocket launchers, four howitzers (including two US-made M198 howitzers), one American-made M1 Abrams, and one US M88 Recovery Vehicle were spotted. Several other vehicles transporting troops to Mosul can also be seen.

The Shiite militias, which are part of the Popular Mobilization Forces, are expected to fight the Islamic State in areas east of Mosul. A spokesman for the PMF said that the militias are moving towards Tal Afar and would launch an offensive against Islamic State forces entrenched there in “a few days or hours,” Reuters reported today.

The Popular Mobilization Forces was established in June 2014 after the Iraqi military and police forces were overwhelmed by the Islamic State in northern, central, and western Iraq. Clerics put out the call for Iraq to support the collapsing security forces. Established militias that are supported by Iran and have openly fought US and British troops during the occupation answered the call and dominate the PMF. They were organized under the aegis of the Popular Mobilization Forces, which is commanded by Abu Mahdi al Muhandi, who was listed by the US government as a specially designated global terrorist in July 2009 and was described as “an advisor to” Qods Force commander Qassem Soleimani.

The militia has long been known to operate American M1 Abrams tanks. Last January, the militia showcased several US-made vehicles in a large convoy somewhere in Iraq. Some pictures of M1’s being in the hands of Hezbollah Brigades existed prior to the video, but these photos and videos have become much more prevalent since. The tanks and artillery were likely given to HB by the Iraqi military, or taken from the Islamic State during operations.