You are here: Home / MidEastGulf / Hezbollah advances on Nusra strongholds in Arsal’s outskirts 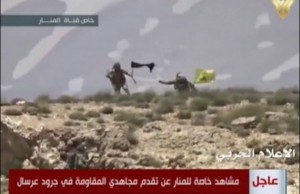 Hezbollah’s media announced Thursday that the group’s fighters made fresh advances against jihadis in mountains southwest of the Lebanese border town of Arsal, taking a key crossing linking the area to eastern Lebanese villages.

Security sources told The Daily Star that Hezbollah cleared militants from key positions in Arsal’s hilltops directly facing other locations controlled by the Lebanese Army. The party’s leader Sayyed Hasan Nasrallah is expected to tackle the battles on the outskirts of Arsal and the border region of Qalamoun during a speech at 5 p.m.

The channel also reported that Hezbollah captured Al-Darb crossing, which it reported was used by jihadis in the past to smuggle car bombs into the predominantly Shiite Lebanese village of Labweh.

The footage also showed one of the men cautiously walking to the newly taken hilltop to replace the black jihadi flag previously erected by the Nusra Front with Hezbollah’s yellow flag.

Al-Manar later reported that the group also bombed a military vehicle belonging to the Nusra Front that was fleeing Al-Rahwe toward Wadi al-Khayl on Arsal’s outskirts. The report said the vehicle was destroyed and the militants inside it were killed.

Meanwhile, a security source told The Daily Star Thursday that three Hezbollah fighters were killed in a Nusra Front ambush two days earlier on the outskirts of Arsal, bringing the party’s death toll in one month of fighting to at least 25.

Hezbollah fighters Wednesday killed at least 11 jihadis and seized more than 15 positions from militants north and south of Arsal’s outskirts, along the porous mountain range on Syria’s western border.

Hezbollah is inching its way toward areas of Arsal’s outskirts where thousands of jihadi fighters affiliated with ISIS, the Nusra Front and other groups have been entrenched since last spring. The groups have been holding 25 Lebanese servicemen hostage there since August. Al-Manar said large numbers of jihadis were heading toward those areas. If Hezbollah pushes on with the offensive, its fighters could reach Arsal’s main outskirts in a matter of days.

March 14 politicians have demanded that Hezbollah stay clear of Arsal and its outskirts, describing the region as a red line that only the Army could cross.

The Cabinet Thursday offered the Army its support to take whatever measures it felt were necessary to secure Arsal and its outskirts, indicating that any decision to intervene militarily to oust jihadis from Lebanese territory would be left to the military’s leadership.

In August, the militants briefly overran Arsal, sparking a five-day battle with the Army. More than 30 soldiers and policemen were taken hostage during the battle, of whom 25 remain in captivity on the town’s outskirts.