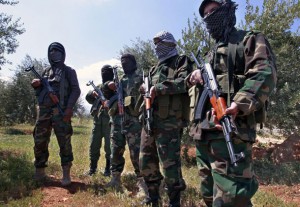 The ongoing Hezbollah offensive in Qalamoun has produced a rare abundance of online combat footage showing the party’s fighters battling militants of the Al-Qaeda-affiliated Nusra Front and allied factions in the rugged mountain peaks of the strategically located region.

Viewing the raw footage leaves an indelible impression of a professional, motivated, well-kitted and disciplined army using an array of weaponry and logistical equipment to prosecute the offensive in the most efficient manner possible.

Israeli military officials have long voiced concern at the valuable lessons Hezbollah’s cadres are learning in the Syria war and how they can be applied to a future conflict between the two enemies.

“We understand that Hezbollah is thinking offensively. It is gaining experience in Syria where it is initiating assaults in built-up areas and attacking cities,” an Israeli army officer told Israeli media last September.

“They are learning about controlling hundreds of fighters, coordinating intelligence, firepower and command and control. This is a serious development that requires us to prepare accordingly.”

The combat footage of the Qalamoun campaign uploaded to the Internet will do little to dispel the concerns of the Israeli army as to Hezbollah’s improving fighting skills.

Hezbollah’s commanders carefully planned the offensive in advance, gathering intelligence on the militants’ deployment using fighters on the ground and pilotless reconnaissance drones, marking the region into operational sectors and amassing the fighters and logistical support necessary for a campaign in remote and largely unpopulated mountainous terrain.

Most of the weapons systems used by Hezbollah, as seen in the combat videos, are standard fare which have stood the test of time from the days of the resistance campaign against the Israeli occupation of south Lebanon. They include mortars of varying calibers, recoilless rifles, “Dushka” 12.7mm heavy machine guns and anti-tank missiles ranging from the relatively antiquated wire-guided Sagger to more modern systems such as the laser beam-guided Kornet. The Sagger, a 1960s-era missile, has little effect against modern armored vehicles. But the Nusra Front and other militant factions are not operating armored vehicles in the lofty Qalamoun heights which grants the Sagger continued utility when used to target cars or batter the external defenses of outposts. In the 2006 war, a single Sagger missile killed nine Israeli soldiers and wounded 11 when Hezbollah fighters fired it into a house of cinder block walls on the outskirts of Dibil village, where the soldiers were sheltering.

Among other weapons previously used in south Lebanon that have emerged in Qalamoun are 130mm artillery guns (Hezbollah had two in the late 1990s) and 57mm anti-aircraft guns mounted on the back of trucks and used in a ground role.

Hezbollah is also using some weapons that have been in their possession from before the Syria conflict but were rarely employed. They include sniper rifles such as the 7.62mm Dragunov and what appears to be, in one video at least, one of the variants of the U.S.-made Barrett .50 caliber sniper rifle.

Systems that have been acquired by Hezbollah during the Syria war include the GP30 grenade launcher slung beneath the barrel of the standard AK-47 rifle. Since the GP30 emerged onto the arms black market in Lebanon 18 months ago, it has become a prestige acquisition for the discerning rifle owner, fetching around $7,000, more than three times the price of a good quality AK-47, according to arms dealers.

Some videos have shown Hezbollah fighters driving T-55 tanks and BMP armored fighting vehicles on loan from the Syrian army. They also have been making use of rocket-assisted mortar rounds that have a relatively short range but pack a powerful punch.

One of the most interesting developments is the tactical use of small short-range micro drones. Several videos feature footage shot by these tiny drones showing Nusra’s positions, moving vehicles or personnel.

Hezbollah’s Al-Manar TV station Wednesday broadcast footage of an attack on a building apparently containing Nusra militants. Some of the video appears to have been shot by the small commercially available Phantom series “quadcopter” drones produced by the Chinese company DJI. Its four propellers make a sound like a swarm of angry bees and its range is limited to around 500 meters depending on the model.

Nevertheless, in rugged terrain such as Qalamoun’s mountains, these inexpensive (around $900) micro drones grant Hezbollah fighters an over-the-hill or around-the-corner view of their immediate environment. One video shot by a Phantom quadcopter shows explosions on the ground below, suggesting it is being used to direct mortar fire onto positions held by the militants.

Footage of the Hezbollah fighters themselves show them wearing desert camouflage uniforms with military helmets and backpacks carrying all they need to fight in the field, an appearance far-removed from the more rag-tag demeanor of their opponents. They seem to use their weapons efficiently, generally firing machine guns in short bursts and their rifles with single aimed shots while holding the weapon by the magazine rather than the fore grip (a technique typical of Hezbollah fighters on the basis that it makes it easier to maneuver the weapon).

Some of the skills Hezbollah is employing in Qalamoun will be irrelevant in the context of a future war with Israel, such as driving tanks and armored vehicles. But other capabilities, such as using the micro drones and rocket-assisted mortars, could find a place in a war against Israel. Most importantly, however, the Hezbollah cadres will have benefitted from combat experience in a wide range of environments, which should give them an edge in close encounters with Israeli troops in south Lebanon or, perhaps, in northern Israel.