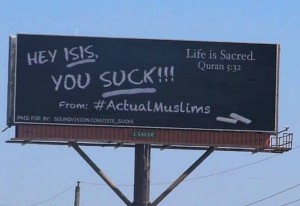 While it’s not the most nuanced approach or even very clever when it comes to U.S. foreign policy and combating the terror groups around the world, Muslim-Americans in Missouri had a very blunt message for the Islamic State group: “Hey ISIS, YOU SUCK!!! From: #ActualMuslims.”

The straight-forward platitude was put on a billboard by St. Louis Muslims, who have joined many others around the country to put up the same sign to show they are united against the terror group that’s wreaked havoc in Syria and Iraq for nearly five years.

“We as a community are trying to get the word out, you know, that we are as much affected by this ISIS issue,” Tariq Malik, one of the organizers behind the effort, told Stltoday.com. “We need to let people know that we are much against ISIS as anyone else, if not more.”

Malik said he doesn’t want anyone to confuse Islam’s beliefs and traditions with the practices and terror associated with ISIS.

“These acts are being done in the name of religion, which really has nothing to do with the religion,” Malik added. “It just has to do with radical people taking on their own agenda and hijacking the name of Islam.”

The effort originally started in August in Chicago, with more popping up in Phoenix and Miami, followed by St. Louis. Like most billboards, each of the “ISIS Sucks” signs can be found on major interstate highways where they have excellent exposure to commuters.

According to Salon, a group of concerned Muslim American professionals approached Mohammad Siddiq, executive director of the Muslim non-profit Sound Vision Foundation, about raising funds for the campaign. Sound Vision’s goal is to both combat the fear of Islam and fight against extremism.