You are here: Home / Mediterranean / Here’s what Special Operators want to do in Libya 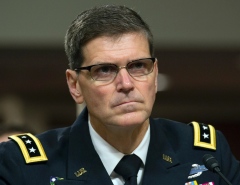 “There is a concern about Libya,” said Gen. Joseph Votel, the special ops chief, who has been nominated to take over U.S. Central Command. “It can’t all be about Iraq and Syria.”

The Islamic State’s presence in Libya has been a growing concern for some time. In October, a Defense Intelligence Agency expert called the country “the hub that they use to project themselves across all of North Africa.” More recently, ISIS has reportedly sent Abu Omar, a key leader in Iraq, to Libya, where he “has been tasked with tightening the terror group’s grip on [the town of] Sirte and preparing it as a possible bolt hole for Isil’s leaders in Syria and Iraq,” the Telegraph reported.

Speaking at the SOLIC conference in Washington, D.C, Votel didn’t get into operational detail, but spoke broadly about what American special operators can do against ISIS there — or in other countries threatened by the group.

“In order to address this threat holistically, we do have to do activities and pursue objectives that allow us to tamp down on it,” he said, “prevent it, and destroy it in areas where it is not wholly grown or beginning to metastasize so that we can bring that area back to legitimate local control.”

Right now, that means more on-the-ground intelligence collection and analysis of networks. In other words, the sort of advanced intelligence work we typically associate with the CIA and less with tactical superhero teams.

That will could mean more non-kinetic, non-combat operations according to Votel, and one key to stopping international terror groups like ISIS, or as he called them, transregional threats.

“What may appear a vast transregional threat is in many cases a series of local issues in which an external actor has taken advantage of by leveraging modern communications through contextually appropriate messaging,” he said.

Votel, who has been tapped to take over Central Command, said U.S. special operators would continue to build up the ability of Libyan government and other partners to combat ISIS on their own.

But in Libya right now, no one is sure exactly what that means. The country has had two rival governments since 2014, each backed by various militias that brought down Gaddafi. On Tuesday, Libya’s Presidential Council announced a new government to bring together the groups. Two of the nine factions rejected the deal.

“It is a challenge in Libya,” he said, “not impossible.”

Combating a group like the Islamic State in a place on the verge—but not yet immersed in crisis—is a different challenge than staging raids in hot war zones like Syria. Consider the bad optics of the failed SOF mission in December. Soon after some 20 special operations troops disembarked from their plane in Libya, they found themselves featured on the Libyan Air Force’s Facebook feed. “While in Libya, members of a local militia demanded that the US personnel depart. In an effort to avoid conflict, they did leave, without incident,” a Pentagon spokeswoman said.