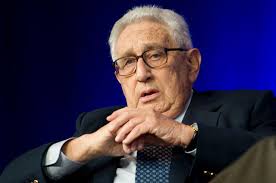 Former US Secretary Of State Henry Kissinger argues that the United States strategy in Syria should focus more on defeating the Daesh (ISIL) terrorist network than removing President Bashar al-Assad.

“The destruction of ISIS is more urgent than the overthrow of Bashar Assad,” the veteran diplomat writes in an article published by the Wall Street Journal, using another acronym for the terror group.

The geopolitical pattern in the Middle East region “is now in shambles” with non-state actors such as ISIL seeking to impose their rule in Syria, Iraq, Libya and Yemen, Kissinger says.

“These conflicting trends, compounded by America’s retreat from the region, have enabled Russia to engage in military operations deep in the Middle East, a deployment unprecedented in Russian history,” he adds.

Kissinger argues that the Russian campaign stems from concerns that the collapse of the current Syrian government could bring ISIL into power in Syria and turn the whole Arab country into “a haven for terrorist operations, reaching into Muslim regions inside Russia’s southern border in the Caucasus and elsewhere.”

American foreign policy, the elderly statesman argues, appears “at odds” with all actors in the region, including “each of the Syrian parties over different objectives.”

The United States has failed to generate effective leverage—political or military—to implement its long-held strategy of removing President Assad from power, he contends. “Nor has the U.S. put forward an alternative political structure to replace Mr. Assad should his departure somehow be realized.”

Russia, he says, merely stepped up to fill the vacuum left by the conflicting US policies.

“Whatever the motivation, Russian forces in the region—and their participation in combat operations—produce a challenge that American Middle East policy has not encountered in at least four decades,” he writes.

Washington accuses Moscow of running a “fundamentally flawed” campaign in Syria that could further escalate the conflict.

The US and its regional allies, including Turkey and Saudi Arabia, have been backing militants fighting the Syrian government.

Secretary of State John Kerry said Monday he will meet with Russian, Saudi and Turkish leaders to discuss a “tangible” solution to the Syria crisis, acknowledging that there is no military solution to the conflict–now in its fifth year.

Kerry said the United States wanted “to try and avoid the complete and total destruction of Syria,” fearing the potential fallout across the region.

“Our fear [is that]… Russia is simply there to prop up Assad,” he said.