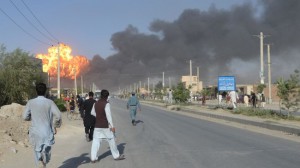 Heavy gunfire and explosions have been heard in an upscale neighborhood in Afghanistan’s capital.

The firefight seemed focused Tuesday night in the Wazir Akbar Khan neighborhood, which is home to several embassies.

Insurgents attacked a courthouse near the Afghan capital Tuesday, killing two police officers as a militant assault raged on in a district in a central province besieged for weeks, authorities said.

Four militants launched the attack on the court in the capital of Wardak province, some 40 kilometers (25 miles) from Kabul, said Attaullah Khogyani, a spokesman for the governor.

One of the attackers blew himself up as the other three exchanged fire with police before being killed, Khogyani said.

No one immediately claimed responsibility for the attack, which comes amid intensified fighting across many parts of Afghanistan since the Taliban launched their warm weather offensive a month ago. Ambushes on police checkpoints are becoming increasingly common as they often are poorly manned and equipped.

In Uruzgan province, officials said that a district has been under attack by militants for the past two weeks.

“A high number of Taliban are attacking different checkpoints but we are not getting any response from senior officials in Kabul,” district chief Abdul Karim Karimi said.

He said that since the fighting began, 12 soldiers have been killed and dozens were wounded.

“Unless we get government help, we are going to lose the district,” he said.

On Monday, militants killed at least 26 police officers and soldiers in ambushes in southern Helmand province. As police retreated, militants surrounded the police headquarters of Naw Zad district and fired down on them from surrounding hills, district police chief Napas Khan said.