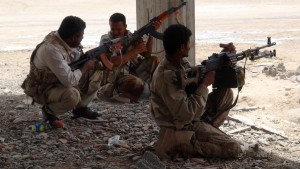 At least 20 Houthi militia fighters were killed in heavy clashes in Yemen’s third-largest city Taiz today, a day after they pounded it with rockets, forces loyal to the government said.

Taiz, considered Yemen’s cultural capital, has suffered huge destruction since becoming a main battleground in the conflict between government supporters and the Iran-allied Houthis, who are backed by forces loyal to former president Ali Abdullah Saleh. It is currently divided between the two sides.

The Houthis and Saleh’s forces are battling a Saudi-led coalition which is trying to restore the government of Yemen’s current president, Abd-Rabbu Mansour Hadi, which is now based in the southern port of Aden.

Forces loyal to Hadi killed at least 20 Houthis and Saleh loyalists in Taiz, their commanders said. Nobody from the Houthis was available to confirm the death toll.

Air strikes and indiscriminate shelling of civilian areas in Taiz on Wednesday killed 22 people and wounded 140 others, the International Committee of the Red Cross (ICRC) said in a statement, citing local hospitals as their sources.

“The situation in Taiz is particularly dire, even by the standards of the appalling conditions all over Yemen, with the nearly half of the hospitals closed and streams of wounded people desperate for treatment,” the head of the ICRC delegation in Yemen, Antoine Grand, was quoted as saying.

Thousands have already fled the violence and those left behind in Taiz are facing severe shortages in water, food, electricity, gas and fuel.

Grand said the ICRC had been trying for five weeks to obtain authorisation to deliver urgent medicines to one hospital.

“This shipment is critical to save lives,” he said.

Also today, the Houthi-controlled Saba news agency said at least 12 Hadi supporters were killed in an ambush by Houthi fighters in Marib, east of Sanaa. Reuters could not verify the deaths.

At least 5,400 people have been killed since March in the fighting in Yemen, the poorest country on the Arabian Peninsula. The United Nations says the humanitarian situation is critical.

Air strikes by the Arab coalition have struck civilian targets on at least four different occasions in recent weeks, including a wedding party on Sept. 28 that killed 131 people.

The Saudi-led coalition has gained ground in southern Yemen, but Houthi forces remain in control of much of the country despite the almost daily air strikes.