You are here: Home / MidEastGulf / Heavy clashes break out in Syrian capital Damascus 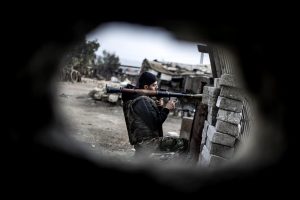 Heavy clashes broke out on the eastern side of the Syrian capital, Damascus, following an attack by rebel-aligned forces early on March 19, state media and a monitoring group said.

Syrian state media reported that the army had repelled an attack by an Al-Qaeda-linked group, saying “terrorists” had infiltrated Damascus through tunnels in the middle of the night.

State TV reported clashes in the city’s Qaboun and Jobar neighborhoods and ordered residents to stay inside.

The clashes come just days before a fresh round of UN-brokered peace talks in Geneva that aim to put an end to Syria’s six-year war, which has claimed more than 320,000 lives.